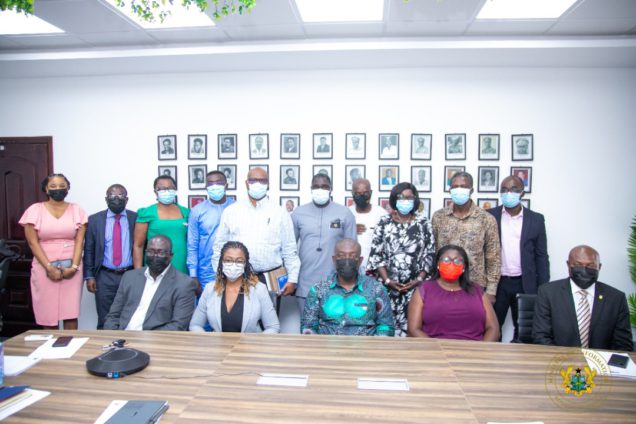 Minister for Information, Kojo Oppong Nkrumah has charged the newly constituted Committee overseeing the reorganisation of the Ghana Broadcasting Corporation (GBC) to work with commitment while also speeding up efforts at repositioning the state broadcaster as one of the leading players in the Ghanaian media landscape.

According to him, the reorganization of GBC demands that the Committee explore ways that will enable the cooperation to be retooled to become one of the vibrant and productive media houses in the country.

He made these remarks in a meeting with the Committee on Monday October 25, 2021, in Accra as part of ongoing discussions to restructure the state broadcaster.

“I would like to recommend the highest level of commitment. We have no doubt that you are committed to this project but against the background of previous committees that were tasked to execute such mandate and failed at it, I will urge you to take it as a personal and professional challenge and come to it with the highest level of commitment so that we can get some good results that posterity will judge us well,” he said.

This the Minister admonished the Committee to execute their mandate with speed such that their recommendations and guidance will be factored into next year’s budgetary appropriation.

The Committee made up of highly experienced members drawn from both the public and private sectors with diverse backgrounds in media, finance, and law were tasked by the Minister to bring their technical skills onboard to collectively cut through the clutter and move GBC from its current position to a more vibrant and efficient media organization.

Mindful of the lack of financial support for previous Committees setup to achieve the same purpose, Mr. Oppong Nkrumah reiterated government support in seeing to it that the public broadcaster is given a facelift.

Chairman of the Committee, Yaw Sarpong called for close collaboration between the Committee, the National Media Commission (NMC) and the Ministry of Information stressing that working together was the only way the transformation agenda of GBC can be realized.