Zimbabwe President says he was ‘inches’ from Bulawayo explosion

Zimbabwe's President Emmerson Mnangagwa has survived an apparent bomb attack at a rally in the city of Bulawayo.

Mr Mnangagwa said an object "exploded a few inches away from me – but it is not my time".

Video footage from White City Stadium shows an explosion happening close to Mr Mnangagwa as he leaves the stage after addressing supporters.

The exact number of people hurt by the blast remains unclear – and reports suggest it may be significantly higher.

The president was in Bulawayo, Zimbabwe's second city and an opposition stronghold, to campaign for his Zanu-PF party ahead of nationwide elections taking place on 30 July.

He is favourite to win the poll, but analysts say he also has enemies – both for overthrowing his former mentor, Robert Mugabe, and for being a previous enforcer of the Mugabe regime.

A spokesman for Mr Mnangagwa said that while the president was unhurt, Vice-President Kembo Mohadi suffered a leg injury. Another vice-president, Constantino Chiwenga, received bruises to his face. 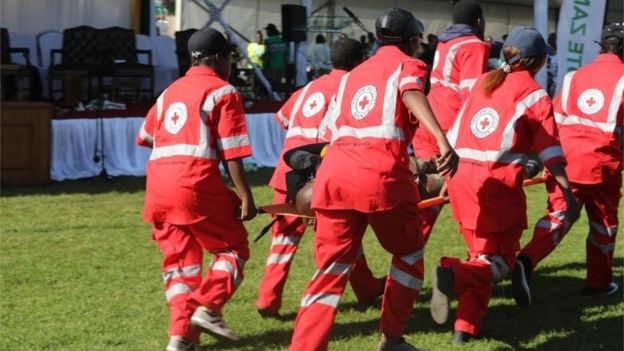 Other officials, including Zanu-PF party chairwoman Oppah Muchinguri-Kashiri, were also injured, as were some crew members from state broadcaster ZBC and security personnel.

Mr Mnangagwa, 75, said he had visited the injured in hospital. He condemned the violence as senseless and pleaded for unity.

"I am used to these attempts," he told state media.

This afternoon, as we were leaving a wonderful rally in Bulawayo, there was an explosion on the stage. Several people were affected by the blast, and I have already been to visit them in the hospital.

While we await further information, my thoughts and prayers are with all those affected by this senseless act of violence. The campaign has been conducted in a free and peaceful environment, and we will not allow this cowardly act to get in our way as we move towards elections.

He was evacuated from the scene soon after the blast.

"People started running in all directions and then immediately the president's motorcade left at a very high speed," an AFP news agency correspondent at the scene reported.

The elections are the first in Zimbabwe since Mr Mugabe was forced out after 37 years in power.

"Vice-President Mohadi is nursing some leg injuries but he is in good spirit," he was quoted as saying.

Marry Chiwenga, the wife of Vice-President Chiwenga, was also injured and pictures on social media showed the president visiting her in hospital.

"Political violence of any nature from any quarter is totally unacceptable," he said.

"In the past 38 years political violence has been a permanent feature and an anticipated ritual… which we must expunge."

The US Embassy in Harare tweeted "thoughts & prayers".

We condemn e attack at e ZANU-PF rally in Byo this afternoon. Political violence in any form is unacceptable & contrary 2 e positive progress required 2 move Zim forward as it seeks 2 take its place on the global stage. Our thoughts & prayers go out 2 e victims & their families.

The election – dominated by economic issues – is the first to be monitored by international observers since 2002. Mr Mnangagwa has said the vote will be free and fair.