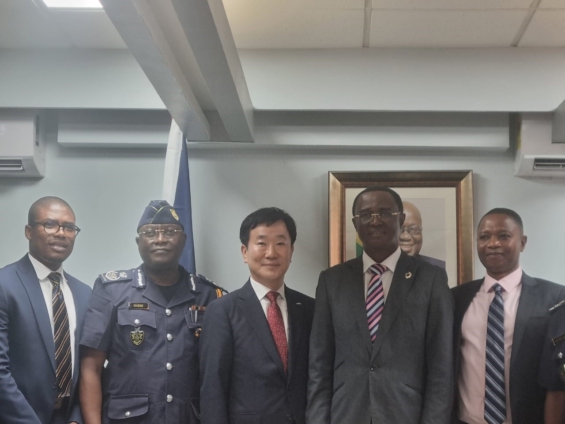 According to the Commissioner-General, revenue generated from the auction of cars and goods through the E-auction platform has surpassed the Commission’s targets.

“Since we introduced the E-auction, which is even on the pilot phase, we have seen significant improvement in the returns we get from the auction of cars and goods.

“The last two we did for the goods, we received more than the reserve price for the total cost of the goods that were auctioned and it was a significant deviation from the previous times since the E-auction was introduced,” the Commissioner-General remarked during a visit to his outfit by the Chairman of Ghana Link, Nick Danso Adjei and Chairman of CUPIA, Kim Yoon-Shik on Wednesday, December 7, 2022.

“The ICUMS system generally has been excellent so far, we have seen significant improvement in our revenue generation, we have seen improved efficiency and even received commendations from our stakeholders which include importers, exporters, freight forwarders among others.

“But we are not complacent, because look forward to adding more modules and improve on the ICUMS,” he added.

On his part, Chairman Kim Yoon Shik, thanked the Commissioner-General for the support given to Ghana Link, its local partners, in the successful rollout of the ICUMS and promised to work hand-in-hand with the Authority to add more modules to improve on the ICUMS to further enhance revenue generation for the country.

The Trade Minister on his part, urged Chairman Kim Yoon Shik of CUPIA and Chairman Nick Danso Adjei of Ghana Link to ensure that the ICUMS continues to ensure efficient revenue generation for government.

The E-auction module of the ICUMS allows Ghanaians to participate and bid for auctioned goods at the ports online.

The feature is to ensure that people buy goods from the port at the right prices and for transparency purposes.

DISCLAIMER: The Views, Comments, Opinions, Contributions and Statements made by Readers and Contributors on this platform do not necessarily represent the views or policy of Multimedia Group Limited.
Tags:
ICUMS
Kim Yoon Shik