18-year-old who threatened to harm a teacher at Kodjonya JHS sentenced to 3 years imprisonment - MyJoyOnline.com 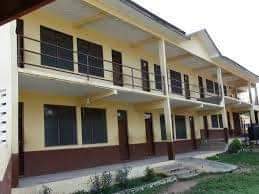 The Odumase Krobo Circuit Court has convicted an 18-year-old man to 3 years imprisonment for threatening to harm a teacher with a machete at Kodjonya a suburb of Odumase Krobo.

The convict, Kwaku Robert, pleaded guilty when arraigned and charged with threat of harm.

Authorities of Kodjonya Millennium Presbyterian Junior High School, in the Lower Manya Krobo Municipality of the Eastern Region, a few days ago closed down the school indefinitely.

This was after an 18-year-old school dropout stormed the school and threatened to harm a National Service personnel who teaches there.

Richard Nanor Narh, 31, sensing danger, fled for his life and formally lodged a complaint with the police at Korletsom.

The suspect accused the teacher of passing provocative comments about him to his junior brother, who is a JHS one student.

According to him, “the teacher told me if I smoke weed, he does better than I can.”

The suspect and his sibling, 14, were arrested by the Odumase Krobo District Police Command for the threat of harm.

The incident, according to a GES Circuit Supervisor in the area caused fear and panic among teachers and students.

This led to the boycotting of the classroom by the teaching staff and the subsequent shut down of the school.

However, upon the arrest and jailing of the suspect, the school has reopened.