1996-year group of AMOSU hands over project to school 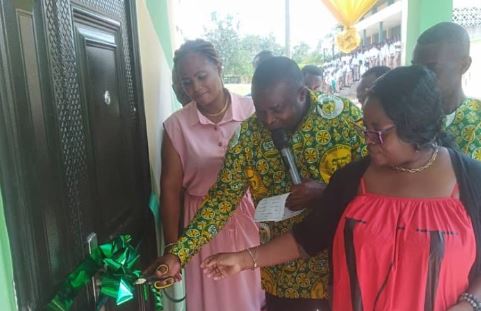 The 1996-year group of Assin Manso Old Students Union (AMOSU), has handed over a well-furnished domestic bursar’s office to augment the numerous infrastructure deficit of the school in the Central Region.

The construction of the GH¢35,000 project, has transformed the compound into a beautiful site.

The Reverend Father Eric Ngetea Kabeniah, Chairman of the 1996-year group, said the construction of a domestic bursar’s office was long overdue, so the group out of love for the school honoured the call.

The handing-over ceremony coincided with the 57th Founder’s Day celebration of the school.

He said their alma mater provided them with the best tuition and moral training that made them responsible citizens for the country.

Rev. Kabeniah, encouraged and advised the students to take their studies seriously and expressed joy about the good behaviour of the students when the group visited the school.

In turn, he applauded the teachers for their hard work, teaching the students good moral values and preparing students to meet emerging challenges of digitisation.

Mr Eric Nyarko, the headmaster of the school who received the keys to the building expressed profound gratitude to the 1996-year group who had been supporting the school.

He assured the group that they would take good care of the facility for longevity.

He also appealed to other year groups who were yet to get on board to emulate their kind gesture and advised year groups currently sponsoring projects for the school to intensify their support.

Mr Emmanuel Appiah-Kubi, Chairman of the Parent-Teacher Association of the school lauded the efforts of the 1996-year group and appealed for more.

Assin Manso Senior High School was established in November 1965 to serve the Assin South District of the Central Region but has become one of the best schools in the Region.

DISCLAIMER: The Views, Comments, Opinions, Contributions and Statements made by Readers and Contributors on this platform do not necessarily represent the views or policy of Multimedia Group Limited.
Tags:
AMOSU
Assin Manso Old Students Union