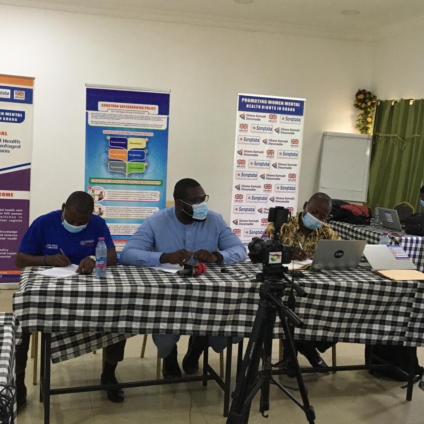 A research conducted by Songtaba, a non-governmental organization in the Northern Region has revealed that 52.7 percent of women accused of witchcraft in the Northern and North East Regions suffer from depression.

This findings were made known at a media engagement organised by the NGO in Tamale to mark International Women’s Day.

The Head of Programs at Songtaba, Abdul Kasiru Shaani, who shared the findings on behalf of the Executive Director, Lamnatu Adam said the research was to determine the prevalence of depression, quality of life and gender dynamics of women accused of witchcraft in camps in the two regions.

He said it was also to improve mental healthcare for disadvantaged people in Ghana, especially the alleged witches.

He said about 66.5 percent of those accused of witchcraft are widows. Mr Shaani noted that alleged witches are maltreated in their various communities before banishment unlike their alleged male counterparts.

The Head of Programs said sociocultural practices, patriarchal nature of society, lack of economic resources and poverty, are among the reasons such allegations are levelled against women.

Abdul Kasiru Shaani said 73.3 percent of the accused indicated that they wanted to be reintegrated back into society and asked for the camps to be closed down.

He however raised concerns about acceptance by community members and safety of the accused.

Abdul Kasiru Shaani called on the Ghana Health Service to expand mental health services and periodic screening for residents of witch camps due to them developing mental health condition.

He also called on government and district assemblies to allocate fund towards improving the living conditions of the camps to make it more habitable in the interim whiles initiating plans to relocate them to their communities.

He further called for the criminalization of witch camps and sanctions against perpetrators.

Songtaba is a women and children’s rights advocacy organisation that promotes and champions the rights of women, children and other vulnerable groups in society.

DISCLAIMER: The Views, Comments, Opinions, Contributions and Statements made by Readers and Contributors on this platform do not necessarily represent the views or policy of Multimedia Group Limited.
Tags:
Songtaba
Witchcraft