981 parcels of substances suspected to be marijuana seized 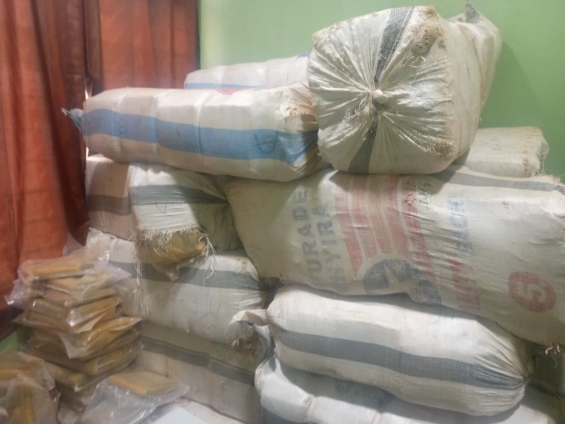 A joint Immigration and Formed Police Unit (FPU) have seized 981 parcels of marijuana at Liero, a community near Fielmuo in the Upper West Region of Ghana.

In a press release, the Immigration Service said the joint team was on a routine patrol on some unidentified routes bordering Burkina Faso when acting on intelligence, conducted a swoop in the house of a man.

According to the statement, the team during the search discovered rooms stocked with sacks of bags containing compressed substances suspected to be marijuana.

The suspected substances totaling 981 parcels were then retrieved and sent to the Hamile Border Post for further investigation and action.

“The respective state security agencies would be invited to analyse the exhibits to ascertain the veracity of our deep suspicion on what the substance is actually,” the Immigration Service said.

In the meantime, frantic efforts are being made to apprehend persons connected to the seized substance to aid in investigation and appropriate action.

The Hamile Border Post Commander, Chief Supt. Owusu Ansah indicated that “whereas we appreciate the impeccable rapport with the locals, we wish to respectfully inform the few unrepentant ones not to stand in our way. They must either change or we change them, middle ground is not an option.”

DISCLAIMER: The Views, Comments, Opinions, Contributions and Statements made by Readers and Contributors on this platform do not necessarily represent the views or policy of Multimedia Group Limited.
Tags:
Hamile border post
marijuana