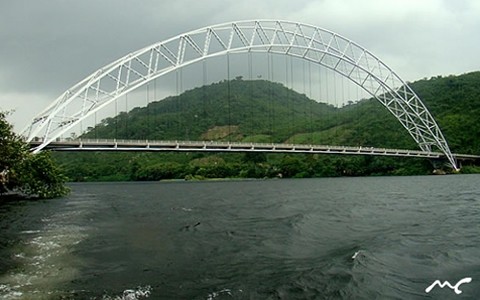 Construction works on the Adomi Bridge rehabilitation project has stalled as workers withdraw their services in demand for improved working conditions.

The rehabilitation works, which are scheduled for completion by October next year, involves replacement of the old decks and the installation of 23 new decks together with the hanger cables.

Speaking to JOYNEWS’ Fred Smith about the latest developments at the construction site, Assemblyman for Atimpoku, Ampim Darko says the workers are demanding increased pay and other working conditions.

Mr. Darko declined to mention the amount the workers were agitating for but intimated that the increment the workers is astronomical-almost four times their current salaries.

According to him, Management for the project were sticking to their guns and refusing to increase the workers’ payments.

On their part, the Management insists that the workers were hired based on an offer, of which terms they agreed to, and that they had signed contracts to that effect. Their position therefore would not be shaken.

Mr. Darko reported that negotiations were therefore at an impasse, as despite appeals from himself and the police, the workers also refuse to budge from their entrenched positions.

The two-hinged steel-arch bridge with a deck suspended by cables, provides connection between the Eastern and Volta Regions over the Volta Lake. It was closed in March this year to make way for repair works.

With the bridge closed, traffic between the two regions has been restricted to water transportation at Senchi.