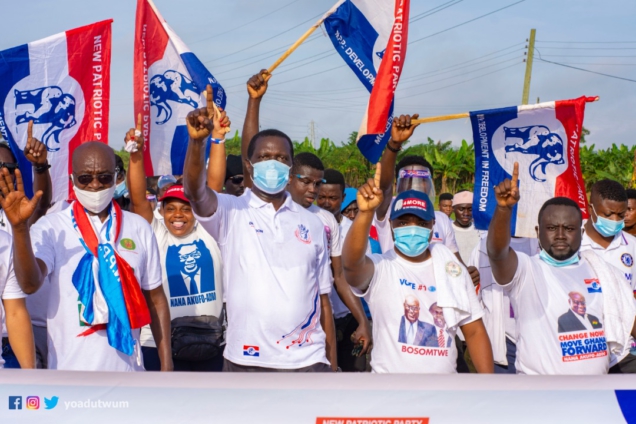 The Bosomtwi MP, Dr Yaw Osei Adutwum over the weekend held a health walk to rally supporters for the ruling party in the constituency ahead of the December polls.

The Deputy Education Minister and his teaming supporters walked through the streets of Jachie, Pramso, Swedru, Abrankesse among others.

They canvassed for support for President Akufo-Addo and the New Patriotic Party. The walk ended at Kuntenase, which is also in the constituency.

Dr Adutwum as part of the campaign urged residents to abide by the Covid-19 protocols in order to avoid a second wave of the outbreak in Ghana.

President Nana Akufo-Addo has lamented the increasing number of active Covid-19 cases in the country.

According to him, the number of daily infections was on the rise with an average of 130 new cases being recorded per day in the last two weeks.

The President in his 18th address to the nation three weeks ago indicated that the number of infections was on the decline with statistics pointing to the fact that the country was on the path towards defeating the virus.

“It appears that we are letting our guard down. Now more than ever, we have to adhere to mask wearing, handwashing, the use of sanitizers and social distancing protocols that have become a part of our daily routines,” the President said.

President Akufo-Addo, therefore, encouraged political party leaders and supporters to wear their masks at all-time even as they embark on their campaigns in the run-up to the December polls to help minimize disease transmission.