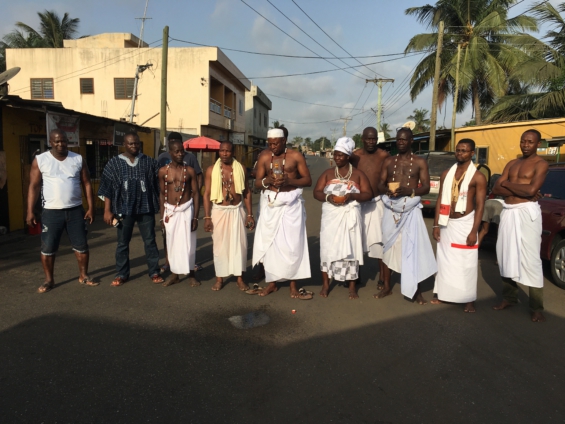 A group of traditionalists in the Ketu North Municipality of the Volta Region has performed some rites and sacrifices to seek the intervention of their gods to curb the spread of the novel coronavirus.

This is to prevent importation of the virus into the country.

A spotless black goat and chicken were slaughtered at the feet of the Aflao Dulegba [community gods] amidst libations and incantations to finalise the rites.

The rites were also to appease the gods who the traditionalists claimed had plagued the world with the coronavirus due to the numerous sins committed by humanity against “Mother Earth.”

Osofo Torga Amuzu Boso, who led the rites, prayed the gods to forgive humanity for committing such atrocities and stop the spread the virus in Ghana, to save the masses from suffering the pandemic.

“The gods directed that we perform the sacrifices to cleanse the land of the sins committed by some people and also seal the borders against the virus.

“We pleaded with Mawu Tsikata and our ancestors to cure any infected indigene who might be living in the diaspora or have travelled into Ghana”, the spiritual leader said.

He also lamented how the closure of the border had affected the livelihoods of the majority of residents in Aflao.

Torgbui Dzakpata who received the directive from the gods indicated the neglect of the traditionalists by successive governments partly accounts for the spread of the virus in Ghana.

He, therefore, appealed to the government to practice equity in dealing with the various religious groups on issues of national interest.

She reiterated the need to continue to abide by the World Health Organization protective measures against the coronavirus, thus frequent washing of hands, maintain social distancing, avoid touching eyes, nose and mouth and the practice of respiratory hygiene.

The Municipal Chief Executive, Elliot Agbenorwu lauded the gesture by the traditionalists and urged all religious groups in the municipality “to continue praying to combat the virus.”

He added that, while the prayers are said for spiritual intersections, stringent measures have been put in place to ensure full adherence of the border closure directive.

“The assembly is working hand in hand with the border security agencies to seal every unapproved route to prevent the movement of people to and from Ghana”, Mr Agbenorwu stressed.