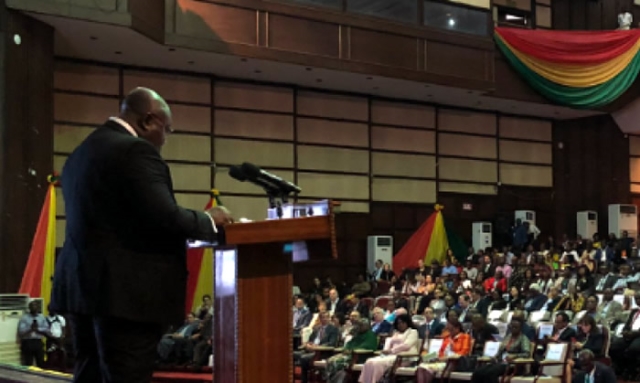 Africa Climate Week got firmly underway in Accra on Tuesday with the commencement of the high-level segment at the Accra International Conference Center.

The event takes place in the shadows of Cyclone Idai, which has hit Mozambique, Zimbabwe, and Malawi, affecting more than 2 million people – a stark reminder of the moral imperative to act on climate change, which experts say is exacerbating such storms. Delegates attending the Climate Week – who number close to 3,000 – observed a one-minute silence for the victims of the catastrophe, which continues to devastate coastlines along Southern Africa.

Media, policymakers and private sector representatives huddled into the Main Hall to welcome the President of the Republic of Ghana who said that, against the backdrop of the disastrous cyclone, Africa Climate Week must “provide more practical solutions to channel financial means towards national climate ambition.” The International Finance Corporation has already put a figure on the investment opportunity of financing these solutions, estimating that the NDCs of 21 emerging market economies alone represents $23 trillion by 2030.

The President – who is both the host of the event and an Ambassador for the Sustainable Development Goals (SDGs) – also used his keynote speech to underscore how “climate change is the biggest threat to the attainment of the whole development agenda.”

This critical interlinkage between the climate and development agendas was a recurring theme throughout the course of Wednesday’s high-level activities – and echoed by many pan-African Ministers – but it was perhaps best expressed by the Mayor of Accra and C40 Chair, Mohammed Adjei Sowah, who said: “I am committing our city to a plan in line with the goals of the Paris Agreement and, simultaneously, in line with the SDGs.”

Acting as Master of Ceremonies during the Opening, Joselyn Dumas – a Ghanaian TV Host and Philanthropist – asked assembled speakers and guests to be mindful of future generations when considering their responsibilities to the environment: “When we neglect our environment, let us remember that we are denying many children the opportunity to a healthy, bright and happy future. Every child deserves a safe space to learn, play, grow and thrive.”

However, the overriding message being heard at this Regional Climate Week, is that this ‘bright and happy future’ will be largely compromised without the proper financing, which also needs to be de-risked to encourage flows of finance to the 54 African nations.

There are some positive signals: the World Bank last week announced $22.5 billion over 2021-2025 in climate support in Africa – a commitment which acted as a precursor to their co-hosting of a ‘Carbon Pricing Day’ on the margins of the Africa Climate Week, highlighting how innovative policies and programs can mobilize climate investments, drive social benefits, and reduce carbon pollutions.

But as the Director of the UNEP DTU Partnership, John Christensen, pointed out during his closing remarks before the lunch break “to attract private sector investments towards climate action projects, we need clear plans and clear ambition.” What this means is that, with the right enabling frameworks in place, public finance can be used more strategically to attract private sector players and scale-up clean energy investment.

This reality-check was softened somewhat with the launch of the Mohammed VI Prize for Climate and Sustainable Development – timed between the two main plenary events –  which Deputy Executive Secretary of UN Climate Change, Ovais Sarmad, stated is a clear example of how “African leadership will benefit the whole world, leaving no one behind, in particular, the most vulnerable.”

Africa Climate Week will conclude on Friday afternoon, where its outcomes will be presented to the Special Envoy for UN Climate Action Summit, Luis Alfonso de Alba, as critical input to the Secretary General’s event on 23 September.