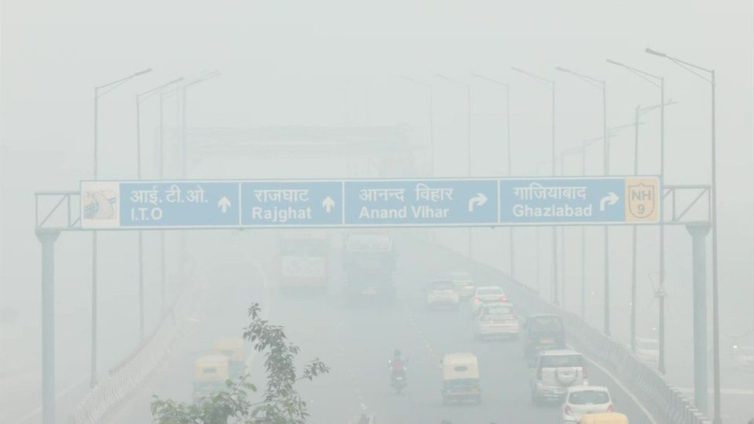 Despite a ban, people across the city burst firecrackers late into Thursday night, worsening pollution levels.

And fireworks during Diwali, which happens at the same time, only worsen the air quality as low wind speeds trap the pollutants in the lower atmosphere.

The concentration of PM2.5 – dangerous tiny pollutants in the air – stood at 999 per cubic metre, the maximum reading, in some parts of Delhi on Friday, according to the government’s air quality monitors. Several places recorded figures close to or higher than 500, which is categorised as “severe”.

A figure between zero and 50 is considered “good”, and between 51 and 100 is “satisfactory”, according to the the air quality index or AQI.

The government banned the sale and bursting of firecrackers this year to curb pollution levels. But that didn’t appear to deter the city’s residents.

A thick layer of smog blanketed the city on Friday morning, and people complained of itchy throats and watery eyes.

Many shared images of the haze on social media.

Nothing festive about the air today. #Diwali #AirPollution #Delhi pic.twitter.com/orGMjN5S7o

Others complained of how “predictable” the dip in air quality had become every year during Diwali.

So much for the cracker ban. Hearing them go off here in Delhi with some frequency. Enjoy making the air pollution worse you idiots. #Diwali2021 #CrackerBan pic.twitter.com/YC7H9GfzsL

Officials said the air would only slightly improve to “very poor” by Sunday evening.

The government’s air quality monitor estimates that stubble burning accounted for some 35% of Delhi’s air pollution on Friday, and its share will likely rise over the weekend.

India has the world’s worst air pollution. Home to 22 of the world’s 30 most polluted cities, India’s toxic air kills more than one million people each year, according to experts.

Last year, Delhi recorded the highest concentration of PM2.5 so far – it was at 14 times the safe limit recognised by the World Health Organization (WHO).

A recent study said that 480 million people in northern India face the “most extreme levels of air pollution in the world”.

It also said that residents in Delhi could see up to 10 years added to their lives if air pollution was reduced to meet the WHO guideline of 10 µg/m³.