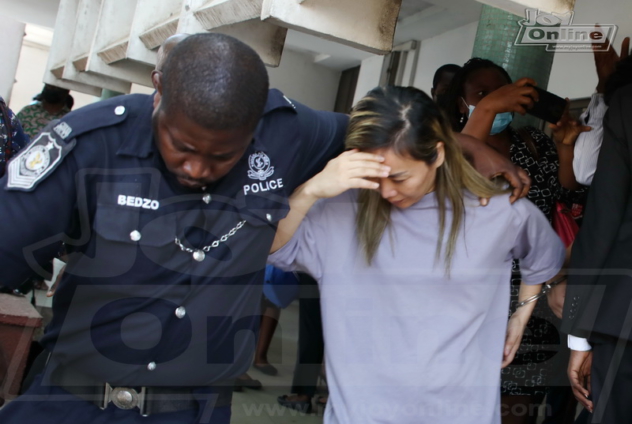 The manner in which Chinese illegal miner, Aisha Huang departed Ghana following her arrest in 2017 has been a subject of controversy.

Miss Huang, according to the prosecution in her trial, sneaked out of the country which truncated her prosection.

It was perceived that the illegal mining kingpin was deported according to earlier reports back in 2018.

Since her recapture some weeks ago, the narrative has become a winding one.

“Or whether she fled the country the first time and has now come back. There still seems to be some uncertainty about it,” he added at a Ho-based radion station.

According to Mr Oppong Nkurmah, the ‘galamsey’ queen was put on a flight and she exited the Ghanaian jurisdiction.

However, this morning, during her trial at the Accra Circuit Court, the facts presented by the prosecution told another story.

She was, however, remanded despite her absence for the rest of the session as prosecutors got the court to extend a warrant of arrest permitting them to hold Aisha for at least two weeks while they carry out further investigations.

Meanwhile, Aisha Huang is to remain in police custody for the next two weeks as the Accra Circuit Court has turned down her request for bail.

There was drama in court on Wednesday morning when the case of notorious illegal mining suspect, Aisha Huang was called.

During the proceedings at the Accra Circuit Court, something seemed off about one of her accomplices.

The said lady was earlier seen escorted into the court premises wearing a black T-shirt.

A few minutes before the ruling was delivered by the judge, the Chinese national is said to have collapsed.

Court correspondent, Joseph Ackah-Blay reports that she purportedly took ill and was conveyed to a hospital.

“Before we realised, she had just collapsed and had to be taken by the policemen and rushed out to the hospital,” he said on Joy FM’s Midday News.

DISCLAIMER: The Views, Comments, Opinions, Contributions and Statements made by Readers and Contributors on this platform do not necessarily represent the views or policy of Multimedia Group Limited.
Tags:
Aisha Huang
court
Deportation
prosecution