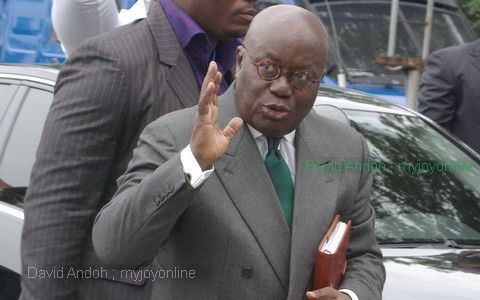 The 2012 NPP flagbearer Nana Akufo-Addo is requesting the Judgment Debt Commissioner, Justice Yaw Appau to invite him to answer questions over the controversial sale of the Ghana National Petroleum Corporation’s drillship in 2001.

Nana Akufo-Addo was Attorney General at the time when the transaction took place.

He advised government on the transaction and his office drafted the power of attorney that was handed former Deputy Energy Minister K. T. Hammond to go sell the ship.

The Judgment Debt Commission is investigating how an amount of 24 million dollars accrued from the sale of the ship to pay judgment debt owed Societe Generale Bank was expended.

The Sole Commissioner Monday expressed his disappointment in the Attorney General’s office for not following up the court case which the GNPC had begun against Societe Generale and sat down until a default judgment was given by the UK court before it then sent K.T Hammond to go negotiate.

Mustapha Hamid, aide to Nana Akuffo Addo, told Joy News his boss is willing to appear before the Judgement Debt Commission but asked that the invitation extended to Messrs K.T. Hammond and Albert Kan Dapaah be extended to him.

“Yes I am saying on authority that Nana Addo is willing to appear before the Judgment Debt Commissioner to answer any questions that would be put to him regarding the drillship.”

Nana Akufo-Addo is currently in London, taking a break from Ghanaian politics after his petition to overturn the 2012 presidential election results was dismissed at the Supreme Court in August.

But Mustapha Hamid said Nana Akufo-Addo would be in town anytime soon to avail himself to any invitation.

“He himself would be in Ghana in the next couple of days or weeks or something like that,” he said.

According to him, his boss is “never worried” about his name coming up strongly in the drillship saga with his critics indicting him for his role in the transaction of the Discoverer 511 (drillship).

The Commission has taken a few days break to study documents presented to it on the sale of the drillship.

Public Relations Officer of the Commission, George William Dove told Joy News the Commission has not “gotten to the bottom” of the matter yet. He said it is perusing the documents and would therefore “not make any conclusive statement at the moment”.