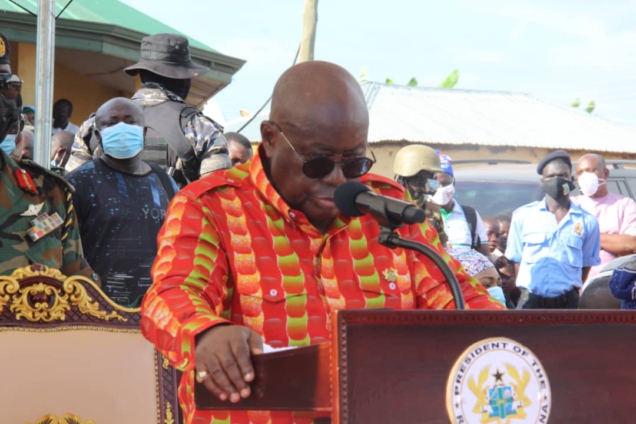 President Akufo-Addo on Tuesday, acknowledged the contributions and massive support of the chiefs and people of Sunyani East and Sunyani West constituencies towards the New Patriotic Party’s (NPP’s) Election 2020 victory.

He called on the people to continue to rally solidly behind his government, contribute and help the NPP to retain political power in the Election 2024, saying his government would ensure that Sunyani equally benefitted from the national cake.

President Akufo-Addo gave the commendation when he paid a courtesy call on the Sunyani Traditional Council to commence his two-day working visit to the Bono Region.

Accompanied by Ministers of State, Members of Parliament (MPs), and some NPP bigwigs, President Akufo-Addo is expected to inspect and inaugurate some projects in the region.

He said the Bono Region, in general, had produced key personalities who had supported his government, and acknowledged among others the commitments of Mr. Ignatius Baffour-Awuah, the MP for Sunyani West and Minister of Employment and Labour Relations as well as Mr. Kwaku Agyemang-Manu, the MP for Dormaa Central and Minister of Health.

President Akufo-Addo announced his government had appointed Mr. Kwasi Ameyaw-Cheremeh, the MP for Sunyani East as the Board Chairman of the Bui Power Authority, while Mr. Kwaku Asomah-Kyeremeh had also been appointed Ghana’s High Commissioner to India.

All these appointments, the President explained were to show his appreciation to the chiefs and people of the region for their support to his government and hoped they would continue to rally behind him in efforts towards national reconstruction.

President Akufo-Addo commended the Sunyani Traditional Council too for the peaceful enstoolment of a new paramount queen-mother.

Oboaman Bofotia Boamponsem II, the Kurontirehene of the Sunyani Traditional Area expressed appreciation to the President for some on-going projects in the Sunyani Municipality, saying the government must be commended for the construction of the inner city road projects and pedestrian walk ways which had to give the town a facelift.

He appealed to the President to facilitate the completion of the New-Dormaa-Yawhima road, and the rehabilitation project of the Sunyani Airport, bemoaning that the deplorable state of access roads in the Sunyani Municipality needed attention.

Oboaman Boamponsem II noted that Sunyani and the Bono Region were fast growing, stating that the region, in general, required a medical school so that the Sunyani Regional Hospital could be upgraded into a teaching hospital to improve on healthcare service delivery.

He said, “Sunyani is in dire need of a befitting sports stadium” and, therefore, appealed to President Akufo-Addo to assist with the necessary funding for the construction of a modern one for the benefit of not only the residents of Sunyani East and West but the entire populace of Bono Region.