Akufo-Addo in 2012: I’ll use ‘Anas Principle’ to fight corruption 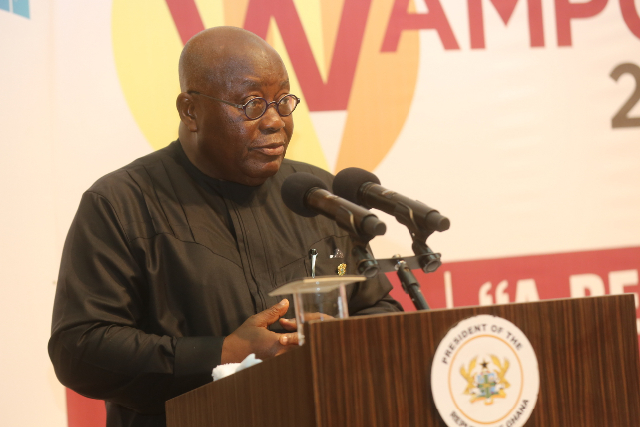 There is growing pressure on President Akufo-Addo to act as investigative journalist Anas Aremeyaw Anas’ latest exposé shows the complicity of government officials in the fight against illegal mining.

A retrieved video shows then-candidate Akufo-Addo in 2012 promising to use the investigative journalist’s strategy to expose corruption if elected president.

In the video, the President said he will deploy a number of measures including the “Anas Principle” to “unearth” the canker.

“The measures are going to be difficult but there has to be a variety of them…including what I consider the Anas ‘Principle’. Setting up highly motivated professional groups of young people who will work as if you like [as it were] undercover to unearth examples of corruption wherever they can find them and thereby allow the authorities to deal with the issue.

“And not only expose the corruption but you will actually deal with it in terms of sending people to court [and] prosecuting them and hopefully the courts will cooperate and make sure the culprits are found guilty and sanctions appropriately enforced. A variety of measures but the key one is the Anas Principle as well as what you do to securitise those in the tax-collecting agency,” the NPP candidate told the panel.

Four years later, he became President and three years into his administration, the same journalist has dug deep to show government officials in a video involved in acts of corruption.

But the narrative seems to have changed as some government officials have taken to social media in defence of the key government official who was filmed in the ‘Galamsey Fraud’ documentary taking cash to allegedly allow a company to mine.

Charles Charles Cromwell Bissiw, a presidential staffer and Secretary to the Inter-Ministerial Committee on Illegal Mining (IMCIM), was seen in the video collecting a sum of ¢35,000 in three meetings through one Andy Owusu, a connection man.

This, Anas claims, was to outwit the process to renew the mining license for ORR Resources Enterprise.

But the government officials disagree condemning the journalist’s style, which was praised by the President.

According to them, Anas’ method of baiting state officials with cash and in the process branding those who fall to the temptation as being corrupt is not right.