Akufo-Addo “not in the mood” to downsize gov’t – Baako 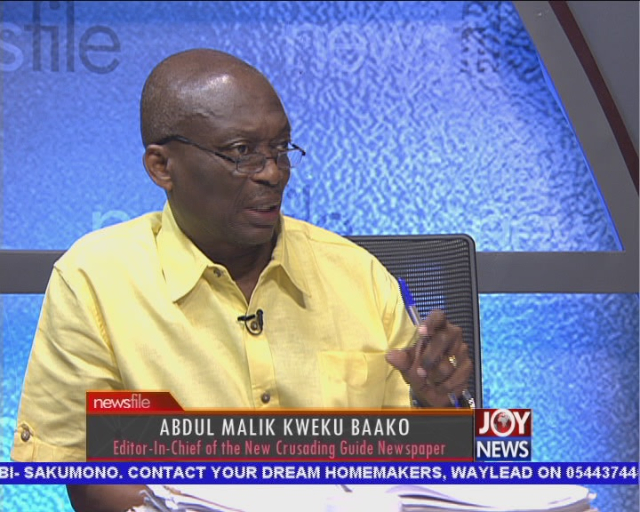 Despite public hue and cry over the size of the Akufo-Addo government, the President is “clearly not in the mood” to downsize, veteran journalist Kweku Baako has revealed.

Editor-In-Chief of the New Crusading Guide, Abdul Malik Kweku Baako said on JoyNews’ Saturday news analysis show, Newsfile, he gleaned this from personal interactions with the President with whom he remains a close ally.

The President has at least 123 ministers and deputies, the largest in Ghana’s 62-year history.  Questions about the ‘elephant-sized’ government have plagued the New Patriotic Party (NPP) government which incidentally has an elephant as its totem.

The President has remained unmoved about keeping this size. So has his critics.

Joining the line of criticisms, the Institute of Social, Statistical and Economic Research (ISSER) of the University of Ghana has prepared a report on the 2018 State of the Ghanaian Economy and the 2019 Mid Year Review.

At the launching of the report, Dr. Charles Ackah of ISSER questioned the need for Ministeries such as the Monitoring and Evaluation, Inner Cities and Zongo Development, Regional Re-Organisation, Development, Transport, Railways, Aviation, Special Development Initiatives.

His call was greeted with cheers.

Discussing the report on Newsfile, Kweku Baako said he has on several occasions tried to argue with the President over the “unprecedented” size of his government.

Defending his decision, the President insisted the size of his government will enable him to implement his vision and mission for the country, Kweku Baako told Samson Lardy on Newsfile, Saturday.

“If you talk to the president, he will be telling you about his vision and his mission and what he wants to achieve. He then will tell you that the end will justify the means based on what the outcome will be. I have such arguments with him,” he said.

The veteran journalist added that “he’s clearly not in the mood to review. That’s the last encounter I had with him relative to this size and the number of ministers and all the rest.”

“It’s not necessarily the cost. You see some of them are even MPs, some of them don’t take double salaries…but whatever it is, his (the president’s) emphasis is on the mission and vision and for that matter the outcome.”

“But the outcome will only come at the end when we’re doing an assessment,” he added.

Speaking on Joy News file Saturday, Abdul Malik Kweku Baako expressed hope that the President, will downsize on his government as the country approaches the election period.

“I think that if along the line, before the next elections, if he could find a way of cutting down the number, I will go for that. Now also there are ministries that could be merged, that also they can take a look at it”.