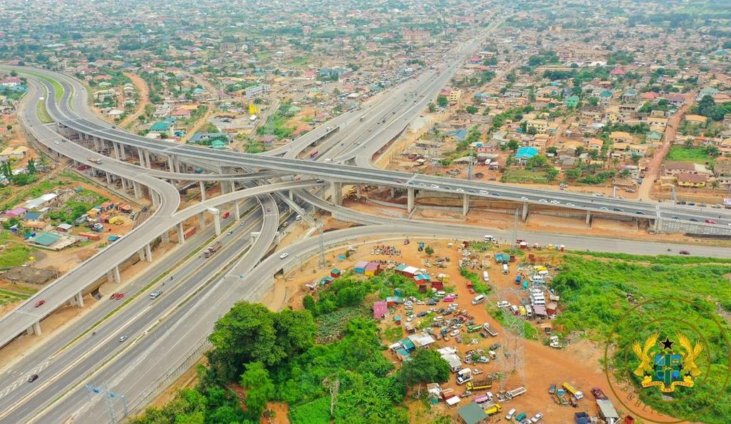 President Nana Akufo-Addo says his government is on course to fulfilling the promise they made to Ghanaians when he presented the state of nation address early this year.

Cutting a tape to formally allow motorists to ply the 4-tier route Pokuase interchange on Friday, he said he was hopeful, traffic congestion which was a bane for many who use the road, would be eased.

The President spoke of how judicious his government has used $289 million to construct three interchanges at Pokuase, Obetsebi-Lamptey and Tamale, against what he says was used by the John Mahama government to construct just the Kwame Nkrumah Interchange alone at $260 million.

The president was also excited about the many other benefits the motorists and residents and living in the vicinity would enjoy due to the interchange.

He continued, “here will also be the protection of the three-hectare Gua Sacred Forest; and the provision of ICT labs for 14 basic schools, which will help train some 10,000 basic school children within the Ga North, South, Central and West Municipalities, with knowledge in information and communications technology.”

The Pokuase Interchange Project also involves constructing the 6.5-kilometre Awoshie to Pokuase road and an interchange at the intersection of ACP junction to Awoshie to Nsawam road.

There are also two footbridges. Drainage works, streetlights, and the construction of 12 kilometres of town roads. The Nsawam road has also been widened by some two kilometres;

He also used the occasion to assess roads that are already being constructed ‘rehabilitation work on the Assin Fosu to Assin Praso highway is currently ongoing, with that of the Agona Junction to Tarkwa highway will begin shortly’.

President Akufo-Addo added, “construction of the dualization of the Sekondi/Adiembra roads, in Sekondi-Takoradi in the Western Region, will begin next month in August,”

He further noted that the Tema Steelworks Road, the only concrete road to be constructed by government since the Accra-TemaMotorway, has also been completed, and similar works are also being undertaken within the Tema Industrial enclave.

He ended by noting that the Ministry of Roads and Highways has programmed to undertake the construction of 1,500 kilometres of asphalt overlay in all parts of the country.