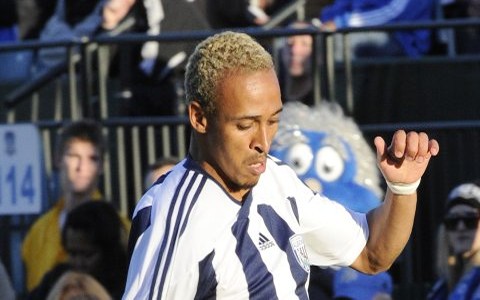 West Brom striker Peter Odemwingie is being linked with a big money move to Al-Gharrafa following talk of a bust-up with Steve Clarke.

The Baggies have moved quickly to play down the speculation with a club spokesman describing the reports as ‘utter nonsense with no basis whatsoever.’

Odemwingie has also been included in a 25-man travelling party selected by the recently appointed Albion head coach for the team’s two game tour of Scandinavia.

Al-Gharrafa are said to be preparing a lucrative deal for the Nigerian international in an attempt to try and tempt him away from the Hawthorns.

Clarke is in no rush though to offload the forward and he would certainly want a ready made replacement lined-up before he would even consider sanctioning his exit to the Middle-East or anywhere else.

The 30-year-old has scored 25 goals for the club in 60 appearances since his moving to the Midlands from Lokomotiv Moscow in August 2010.