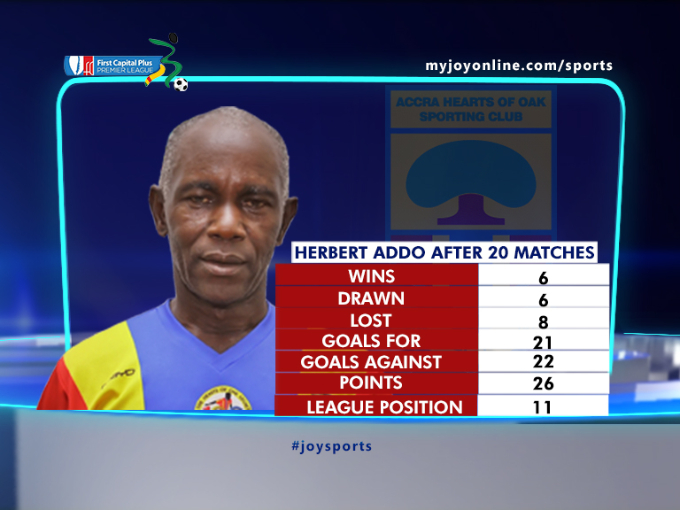 Joy Sports reported that Herbert Addo had been give three matches to save his job with the Phobians. So far, he's beaten Kotoko meaning he technically has two games to keep the portfolio.

The graphic above tell the story of Herbert Addo's season.

Hearts head coach has hit out at his critics who have called for head after stating that the technical team is not solely accountable for the team’s woeful form.

The experienced manager was speaking after Hearts penalty shoot out victory over Kotoko in the President’s Cup. He hoped the victory will be a turning point in the Phobians' season.

“Of course it is a booster for the players.I am also happy we won the cup but the most important thing is our position on the league,” Addo told reporters.

“Sometimes supporters think everything is technical but then they should look at the other side. A team is made up of a board of directors, management. Only about thirty per cent of how a team functions is technical.” “If the next coach comes and doesn’t get the facilities, the equipment all these kind of things, how are they motivated? They should stop [always calling for the head of] the coach. No problem, are you thinking about the players?”

Question is: with Hearts not playing delectable football and scraping results, can impatient supporters truly wait for the team to gel – as Herbert has argued – or will they encourage management to push him out?

Our view is that no matter who takes over, the team will face the same issues simply because they are yet to hit their groove as a team. And that takes time.

Patience is key, because they are signs of good tidings coming.

Hearts will host the Sekondi side on match day 21 of the First Capital Plus Bank Premier League at the Accra Sports Stadium on Sunday.

The Phobians, fresh from their President’s Cup victory over arch rivals, Asante Kotoko last Wednesday will be well motivated to beat the Sekondi based club on the day.

The first round game in Essipong ended 1-1; the Phobians took the lead before Hasaacas pulled even.

Herbert Addo, with his team 11th, is under severe pressure to grind out a good result in the Hasaacas game but the Sekondi based club will not be a push over judging from their last home game against the league leaders AshGold.

However, Hasaacas 'keeper George Owu (pictured) believes a draw or a win for Hasaacas against Hearts of Oak will be a good result for the Sekondi based club.

“It will be a difficult game in Accra because Hearts of Oak is a big club and they are under pressure to win on the day but we are also under pressure due to our current position on the log sheet. So a draw or a win will be a very good result for Sekondi Hasaacas,” he said.

Hearts of Oak failure to win the game will deepen their woes in the ongoing but Phobian midfielder; Richard Yamoah said they have to win in order to ease the pressure currently facing the club.

“The pressure in Hearts of Oak now is so severe; all because the club is not performing well and in order to ease those pressure we have to win against Hasaacas and doing so will somehow put back the smiles on the faces of the supporters,” Yamoah said.

Since 1999, Hearts of Oak have engaged Sekondi Hasaacas 24 times in the league; The Phobians have won 14 games, drawn 6 and lost 4.

60 goals have been scored between the two sides in their 24 meetings; Hearts of Oak leads the way with 39 goals as against 21.

The last time Hearts of Oak hosted Hasaacas at the Accra sports stadium was in the 2013/14 first round fixture which the Phobians won the game 2-1, Emmanuel Hayford and Winful were the scorers for Hearts of Oak while Samuel Afful struck the consolation goal for the Sekondi based club.