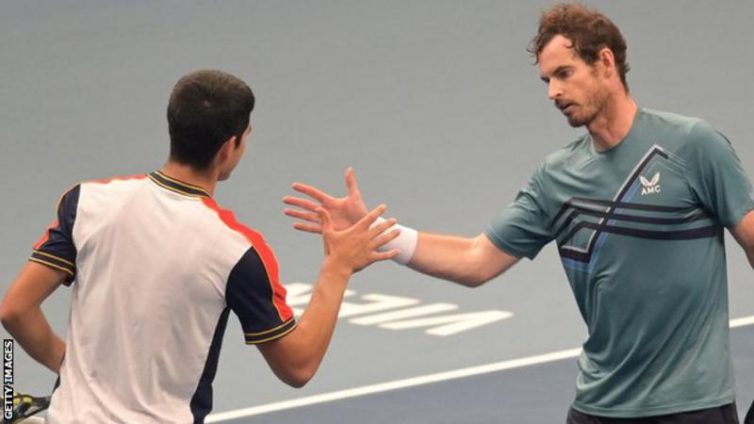 Britain’s Andy Murray was beaten at the Vienna Open for the first time in his career after a straight-set defeat by Spanish teenager Carlos Alcaraz.

Murray, 34, broke early in the second, but Alcaraz fought back to win the final four games and seal victory.

In the opening round, Murray earned his first success of the year against a top-10 opponent by beating Poland’s world number 10 Hubert Hurkacz.

The toll of Monday’s win, plus the physicality of a gruelling first set, appeared to eventually sap the energy from Murray against 42nd-ranked Alcaraz.

When Alcaraz ended another long rally with a stunning cross-court forehand winner which set up match point, Murray was left bent over with hands on his knees in exhaustion.

A weary backhand into the net sealed defeat for the world number 156 as Alcaraz took his first opportunity.

Despite going out, there will be plenty of positives for the three-time Grand Slam champion – who has a metal hip after career-saving surgery in January 2019 – from his time in the Austrian capital.

Alcaraz is the youngest player ranked in the top 300 after a sharp trajectory over the past couple of seasons, with his talent seeing him tipped by many observers to be one of the leading players on the ATP Tour in the years to come.

Against Murray, he showed why.

The former world number one beat Alcaraz when they met at Indian Wells earlier this month, with his younger opponent struggling on that occasion to hit through the Scot’s defence.

That set the tone for a hard-fought opening set where both created plenty of break points in a series of long games.

Murray took his sixth break point to level at 2-2 before Alcaraz – who had beaten British number two Dan Evans in the first round – instantly broke again and then held for a 4-2 lead.

The teenager’s ability to brush off setbacks and mentally reset was evident, upping the ante in the latter stages of the opening set and doing the same from a 4-2 deficit in the second set.

After hitting 42 unforced errors against Murray in Indian Wells, his improvement was shown here as he finished with 27 winners and 16 errors.

While Murray exits, British number one Cameron Norrie will look to reach the last eight when he faces Canadian sixth seed Felix Auger-Aliassime on Thursday.