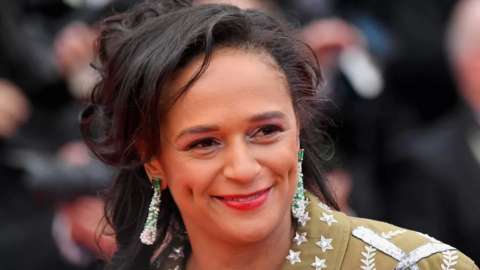 Angola’s Attorney-General Helder Pitta Groz has confirmed that his country has issued an arrest warrant for former President Jose Eduardo dos Santos’ daughter, Isabel dos Santos, according to reports on the Angola24Horas website and the Angop website.

Mr Groz said that the Angolan authorities were working with Interpol to find Ms Dos Santos.

She has been charged by Angolan authorities with mismanagement and embezzlement of public funds when she headed the state oil firm, Sonangol.

The government has filed several civil and criminal lawsuits demanding more than $5bn (£4.1bn) from her. Ms Dos Santos has denied the charges.

In an interview with The New York Times she said that she was available for questioning.

“My address is known, my whereabouts are known,” she told the newspaper.

“I’m not a fugitive. I’m not hiding from anyone,” she added, saying that she was living in London.

She also described the accusations as politically motivated.