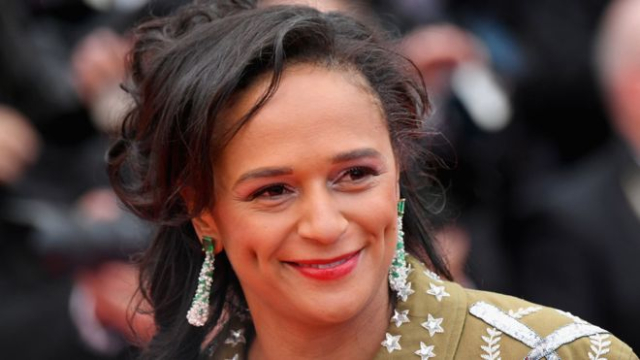 Leaked documents reveal how Africa’s richest woman made her fortune through exploiting her own country, and corruption.

Isabel dos Santos got access to lucrative deals involving land, oil, diamonds and telecoms when her father was president of Angola, a southern African country rich in natural resources.

The documents show how she and her husband were allowed to buy valuable state assets in a series of suspicious deals.

Ms Dos Santos says the allegations against her are entirely false and a politically motivated witch-hunt by the Angolan government.

She is already under criminal investigation by the authorities in Angola for corruption and her assets in the country have been frozen.

Now BBC Panorama has been given access to more than 700,000 leaked documents about the billionaire’s business empire.

Most were obtained by the Platform to Protect Whistle-blowers in Africa and shared with the International Consortium of Investigative Journalists (ICIJ).

They’ve been investigated by 37 media organisations including The Guardian and Portugal’s L’Espresso newspaper. 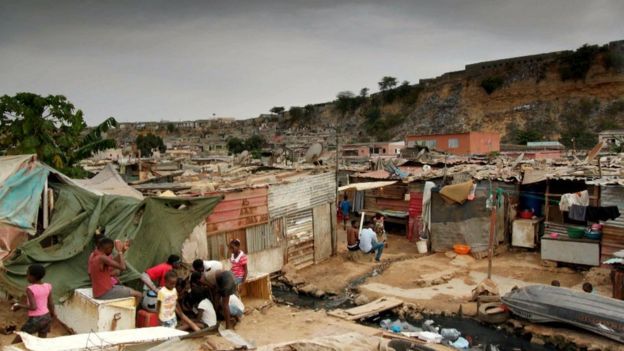 Andrew Feinstein, the head of Corruption Watch, says the documents show how Ms Dos Santos exploited her country at the expense of ordinary Angolans.

“Every time she appears on the cover of some glossy magazine somewhere in the world, every time that she hosts one of her glamorous parties in the south of France, she is doing so by trampling on the aspirations of the citizens of Angola.”

The ICIJ have called the documents The Luanda Leaks.

One of the most suspicious deals was run from London through a UK subsidiary of the Angolan state oil company Sonangol.

Ms Dos Santos had been put in charge of the struggling Sonangol in 2016, thanks to a presidential decree from her father Jose Eduardo dos Santos, who kept a tight grip on his country for the 38 years he was in power.

But when he retired as president in September 2017 her position was soon under threat, even though his hand-picked successor came from the same party. Ms Dos Santos was sacked two months later.

Many Angolans have been surprised at the way that President Joao Lourenço has gone after the business interests of his predecessor’s family.

She says she has no financial interest in Matter, but the leaked documents reveal it was run by her business manager and owned by a friend.

Panorama understands that Matter sent more than 50 invoices to Sonangol in London on the day that she was fired.

Ms Dos Santos appears to have approved payments to her friend’s company after she was sacked.

Although some consultancy work had been carried out by Matter, there’s very little detail on the invoices to justify such large bills.

Two of the invoices – each for €676,339.97 – are for exactly the same work on the same date and Ms Dos Santos signed them both off anyway. 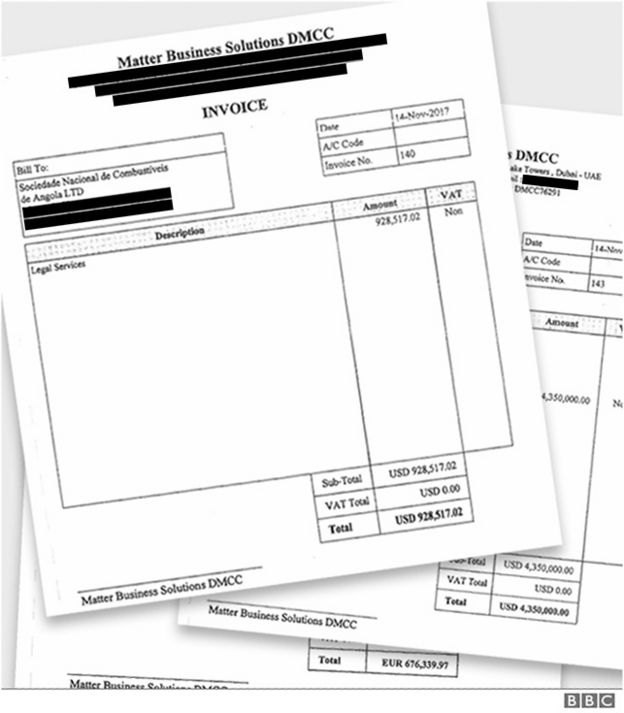 Lawyers for Matter Business Solutions say it was brought in to help restructure the oil industry in Angola, and that the invoices were for work that had already been carried out by other consultancy companies it had hired.

“Regarding the invoices related with expenses, it is common for consultancy companies to add expenses to invoices as a general item. This is often due to those expenses involving large amounts of paperwork… Matter can produce documentary evidence to confirm all expenses incurred.”

Ms Dos Santos’s lawyers said her actions with regard to the Matter payments were entirely lawful and that she had not authorised payments after she had been dismissed from Sonangol.

They said: “All invoices paid were in relation to services contracted and agreed between the two parties, under a contract that was approved with the full knowledge and approval of the Sonangol Board of Directors.”

The ICIJ and Panorama have also uncovered new details about the business deals that made Ms Dos Santos rich.

Much of her fortune is based on her ownership of a stake in the Portuguese energy company Galp, which one of her companies bought from Sonangol in 2006.

The documents show it only had to pay 15% of the price upfront and that the remaining €63m ($70m) was turned into a low-interest loan from Sonangol.

Under the generous terms of the loan, her debt to the Angolan people didn’t have to be repaid for 11 years.

Her stake in Galp is now worth more than €750m.

Ms Dos Santos’s company did offer to repay the Sonangol loan in 2017.

The repayment offer should have been rejected because it didn’t include almost €9m of interest owing. 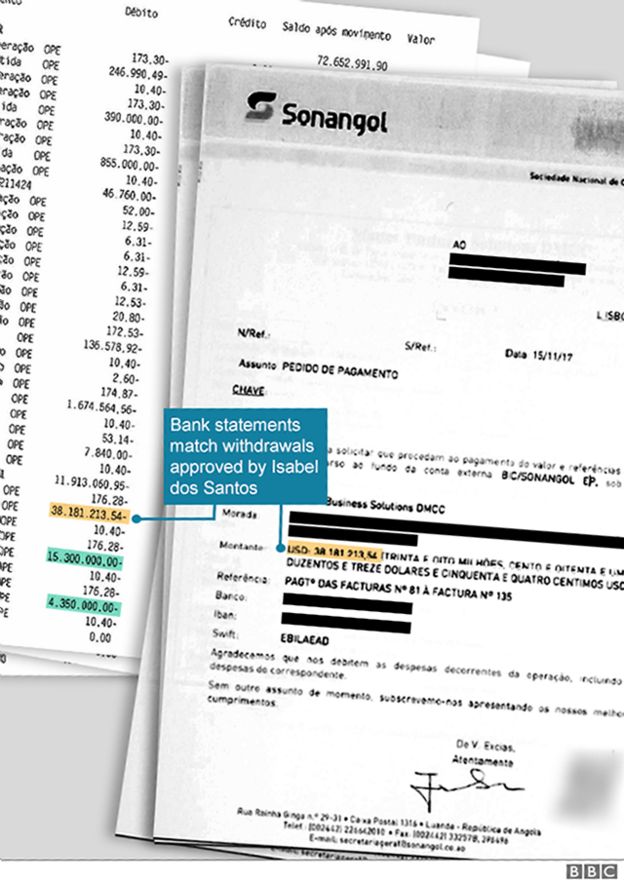 But Ms Dos Santos was in charge of Sonangol at the time and she accepted the money as full payment of her own debt.

She was fired six days later and the payment was returned by the new Sonangol management.

Ms Dos Santos says she initiated the purchase of the stake in Galp, and that Sonangol made money from the deal as well.

“There’s absolutely no wrongdoing in any of those transactions. This investment is the investment that in history has generated the most benefit for the national oil company and all the contracts that were drafted are perfectly legal contracts, there are no wrongdoings.”

Her lawyers say the repayment offer in 2017 covered what Sonangol had indicated was owed.

It’s a similar story in the diamond industry.

They were supposed to be 50-50 partners in a deal to buy a stake in the Swiss luxury jeweller De Grisogono.

But it was funded by the state company. The documents show that 18 months after the deal, Sodiam had put $79m into the partnership, while Mr Dokolo had only invested $4m. Sodiam also awarded him a €5m success fee for brokering the deal, so he didn’t have to use any of his own money. 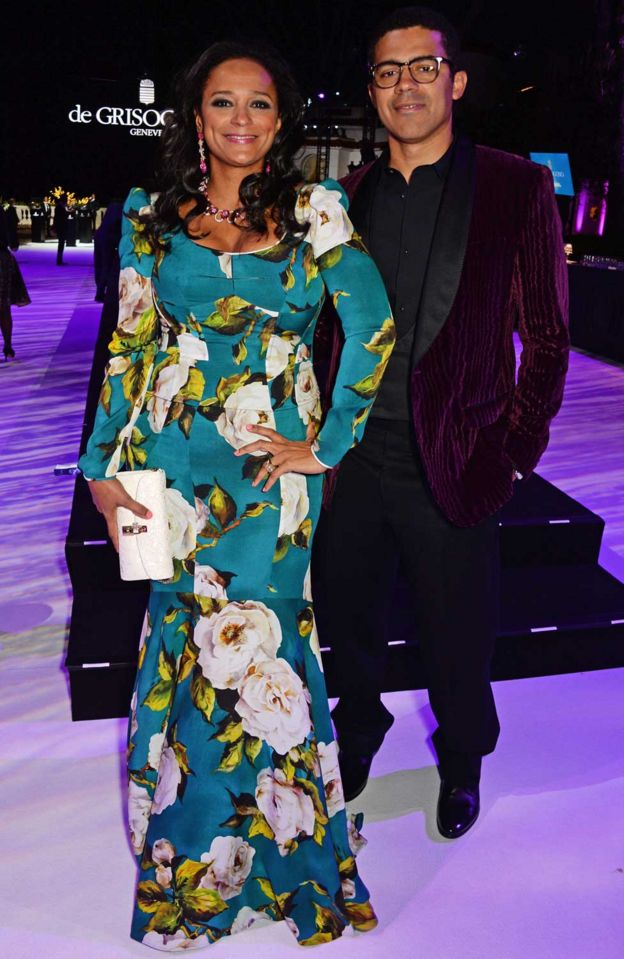 The diamond deal gets even worse for the Angolan people.

The documents reveal how Sodiam borrowed all the cash from a private bank, de Grisogono, in which Ms Dos Santos is the biggest shareholder.

Sodiam has to pay 9% interest and the loan was guaranteed by a presidential decree from her father, so Ms Dos Santos’s bank cannot lose out.

Bravo da Rosa, the new chief executive of Sodiam, told Panorama that the Angolan people hadn’t got a single dollar back from the deal: “In the end, when we have finished paying back this loan, Sodiam will have lost more than $200m.”

The Angolan government says the diamonds were sold at a knockdown price and sources have told Panorama that almost $1bn may have been lost.

Ms Dos Santos told the BBC she couldn’t comment because she is not a shareholder of de Grisogono.

But the leaked documents show that she is described as a shareholder of de Grisogono by her own financial advisers.

Mr Dokolo did put in some money later. His lawyers say he invested $115m and that the takeover of de Grisogono was his idea. They say his company paid above the market rate for the raw diamonds.

The leaked documents also reveal how Ms Dos Santos bought land from the state in September 2017. Once again she only had to pay a small up-front fee.

Her company bought a square kilometre of prime beachfront land in the capital Luanda with the help of presidential decrees signed by her father. 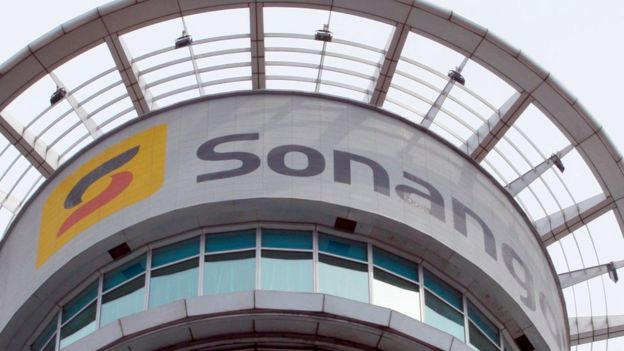 The contract says the land was worth $96m, but the documents show her company paid only 5% of that after agreeing to invest the rest in the development.

Panorama traced some of the ordinary Angolans who were evicted to make way for the Futungo development. 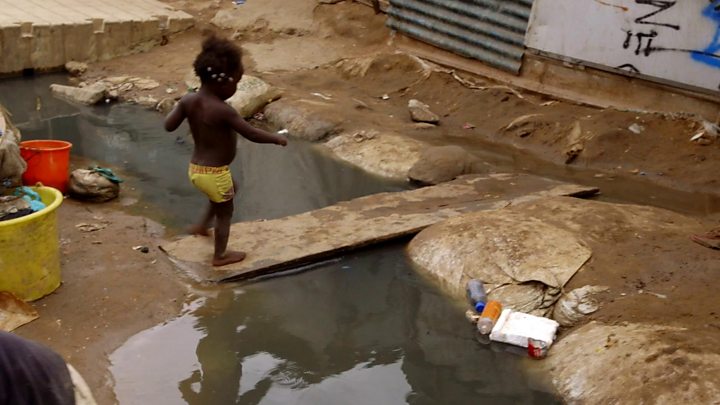 Resident describes life next to an open sewer in Angola

They’ve been moved from the Luandan seafront to an isolated housing development 30 miles (50km) from the capital.

Teresa Vissapa lost her business to Ms Dos Santos’ development and is now struggling to bring up her seven children.

She said: “I only ask God to make her think a little more about our situation. Maybe she doesn’t even know it, but we are suffering.”

Ms Dos Santos declined to comment on the Futungo development.

But it was not the only land deal involving Ms Dos Santos that displaced the local population.

About 500 families were evicted from another stretch of the Luandan seafront after Isabel dos Santos got involved in another major redevelopment project.

The families are now living in desperate conditions next to an open sewer. Some of their shacks are flooded with sewage whenever the tide rises.

Ms Dos Santos says there weren’t any evictions linked to her project and that her companies were never paid because the development was cancelled.

The billionaire has also made big profits from the telecoms industry in Angola.

She acquired a 25% stake in the country’s biggest mobile phone provider, Unitel. It was granted a telecoms licence by her father in 1999 and she bought her stake the following year from a high ranking government official.

Unitel has already paid her $1bn in dividends and her stake is worth another $1bn. But that’s not the only way she got cash from the private company.

She arranged for Unitel to lend €350m to a new company she set up, called Unitel International Holdings. 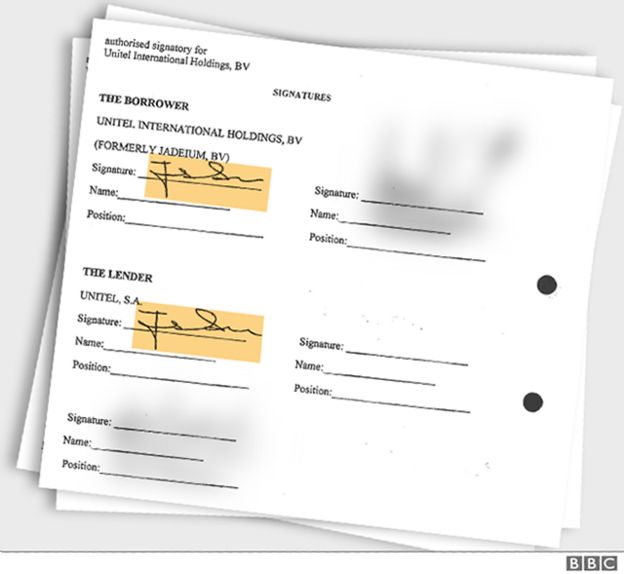 The company name was misleading because it wasn’t connected to Unitel and Ms Dos Santos was the owner.

he documents show Ms Dos Santos signed off on the loans as both lender and borrower, which is a blatant conflict of interest.

Ms Dos Santos denied that the loans were corrupt. She said: “This loan had both directors’ approval and shareholders’ approval, and it’s a loan that will generate, and has generated, benefit for Unitel.”

Her lawyers say the loans protected Unitel from currency fluctuations.

Most of the companies involved in the dodgy deals were overseen by accountants working for the financial services company, Price Waterhouse Cooper (PWC). It’s made millions providing auditing, consultancy and tax advice to her companies.

But PWC has terminated its relationship with the billionaire and her family, after Panorama questioned the way the company had assisted Ms Dos Santos in the deals that had made her rich.

PWC says it is holding an inquiry into the “very serious and concerning allegations” and has stopped working with Ms Dos Santos and her family. 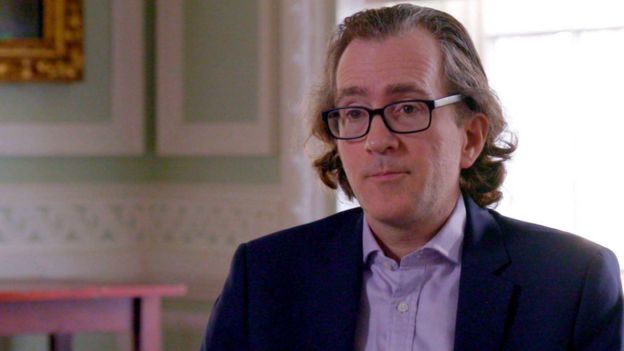 Tom Keatinge, director of the Centre for Financial Crime and Security Studies, criticised Price Waterhouse Cooper for giving the corruption a “veneer of respectability”.

Tom Keatinge, director of the Centre for Financial Crime and Security Studies, told Panorama that PWC had given legitimacy to Ms Dos Santos and her companies.

“PWC, if not facilitating the corruption, are providing a veneer of respectability that makes what’s happening acceptable or more acceptable than it might otherwise be.

“So if I was at PWC I’d be conducting a pretty thorough audit of what decisions were made, and in hindsight actually: ‘Did we make the wrong decision to accept this business and should we have reported what we had been presented with?'”

PWC says it strives to maintain the highest professional standards and has set expectations for consistent ethical behaviour across its global network.

“In response to the very serious and concerning allegations that have been raised, we immediately initiated an investigation and are working to thoroughly evaluate the facts and conclude our inquiry.

“We will not hesitate to take appropriate actions to ensure that we always stand for the very highest standards of behaviour, wherever we operate in the world.”