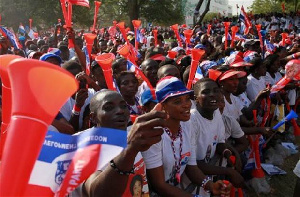 A group calling itself “Concern Members of the New Patriotic Party” in Atiwa East in the Eastern Region is asking the National Executives of the party to call the Constituency Executives to order and ensure a peaceful registration exercise and membership update.

According to the group, the Constituency Chairman and some few members among the Constituency Executives are deliberately denying some members of the party an opportunity to participate in the ongoing party voter registration and nationwide membership update program.

The group says, the Constituency Chairman, Yaw Antwi instead of adhering to the General Secretary’s directive, has decided to stifle the process with an agenda to prevent some members alleged to be critics of his administration.

Spokesperson of the group, Samuel Ansong said the Constituency Chairman, Yaw Antwi has warned all polling station chairmen to desist from making the registration exercise public and to ensure that they register only some selected members.

Mr. Ansong added that the polling station executives are moving to the homes of some members to register them while denying a majority of the party members the opportunity to register or be validated.

‘Per the General Secretary’s directive, we are supposed to have a registration center at every polling station. The polling station executives are to use available medium not limited to information centers to announce the registration exercise and sensitize members to go and register but the contrary is happening in our constituency’ Mr. Ansong stressed.

The scheme according to Mr. Ansong is geared towards retaining the Constituency Chairman, Yaw Antwi, and the Member of Parliament, Madam Abena Osei-Asare in power.

The Concern NPP members of Atiwa East say, if the regional and National Executives do not step in to ensure that every party member is properly registered, there would be voter apathy in the Atiwa East Constituency during the 2024 Presidential and Parliamentary elections.