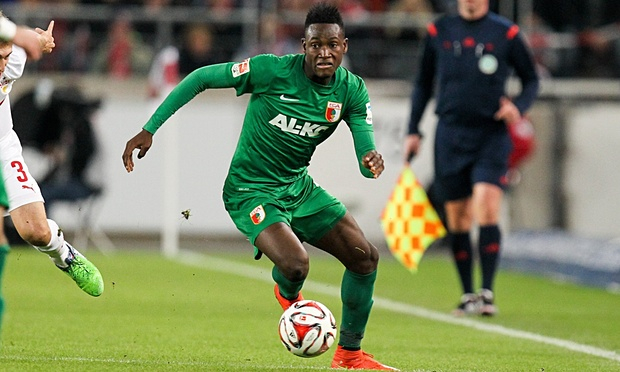 Roma director Walter Sabatini is working to bolster the wingback position and has agreed terms with Baba Abdul Rahman.

Sabatini has been negotiating hard this weekend and on Sunday he reached an agreement with Ghana left back Baba Abdul Rahman. But now needs to finish terms with Augsburg.

Roma have offered Baba a 5 year contract with annual wages of €2.2 million a year.

The Italian giants shrugged off English Premier League champions Chelsea who were giving the Black Stars defender €1.8 million in annual wages and €15 million to Augsburg.

The German club, however, is asking for €25 million plus bonuses to sell the 21 year old . While Roma waits to bridge the gap with Ausburg, the Italians have an agreement with Baba.

Manchester City and Arsenal are among the stellar list of clubs to have registered an interest in signing the Afcon runner up.

His rise has been meteoric, as he joined Augsburg from Greuther Fürth only last summer. And a summer before was playing in Ghana.

He has also been the subject of inquiries from Juventus, Internazionale and Atlético Madrid after an impressive season in the Bundesliga.

But it is understood that he would favour a move to England this season, with Chelsea having contacted his representatives last month over making a potential bid. Manchester City are also keeping tabs on his situation as they search for a long-term solution to their problem left-back position, with neither Aleksandar Kolarov or Gaël Clichy having made the role his own.

Despite the presence of Kieran Gibbs and Nacho Monreal in his squad, the Arsenal manager, Arsène Wenger, has also been impressed by Rahman, who helped Augsburg finish fifth in the Bundesliga last season – the highest finish in the club’s history.

Last week, Augsburg’s sporting director Stefan Reuter insisted they wanted to hold on to a player who still has four years of his contract remaining.