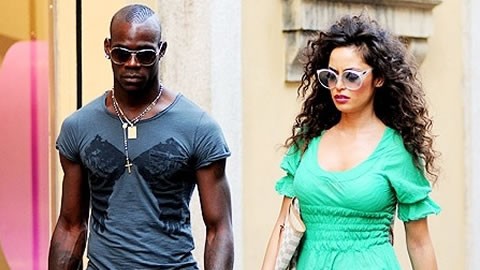 Mario Balotelli’s pregnant ex-girlfriend has penned a passionate letter to the soccer star – agreeing to take a paternity test to prove the baby is his.

In the emotionally-charged message, sexy lingerie model Raffaella Fico, 27, slams Balotelli, 21, for accusing her of “cashing in” on the pregnancy.

The couple split in April after their tempestuous year-long relationship ended with a doorstep bust-up.

But two weeks ago, TV showgirl Raffaella revealed she was almost four months pregnant – and the baby was his.

Initially, the Manchester City striker was said to be “delighted” with the news but then issued a strongly worded statement saying he would ”accept his full responsibilities once a paternity test” was completed.

She makes clear she still has feelings for him, even though the Italian soccer star has insisted there is no chance of reconciliation.

She wrote: “This child I desire with all my heart and I want it because it is not a child that arrived by chance but instead it is the fruit of love between two people and you know well what I am talking about.

”This letter was the only way I could speak to you. I am happy to take the DNA test but I still have the text messages you sent me from Krakow (during Euro 2012) in which you said you were happy with the news I had given you.

”Even if the events of life have separated us you will be a present and responsible father, as well as one being full of love for his child. You know full well where to find me and I will always be ready to speak with you about the future of your child. Of our child.”

She added: ”I’m writing this letter because I was left deeply hurt as a woman but also as a mother by what you said in your cold statement.

“I find it unfair on your part that you wrote (if you indeed did write it) the insinuation that I was cashing in on the birth of our child.