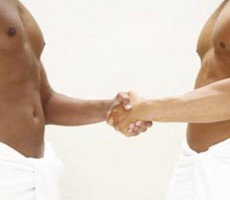 Plenty of people identify as bisexual, but scientists are still trying to figure out what that means in terms of physiological arousal and attraction.

A new study in the journal Biological Psychology claims to have at least shown that some men who say they’re bisexual actually get aroused by both men and women. And that’s a new result; a controversial 2005 study could not demonstrate bisexuality.

This study does find it, perhaps because of the way researchers recruited participants. The new research focuses on self-identified bisexual men who’d had a romantic relationship of at least three months with at least one person of each sex, and at least two sexual partners of each sex – much more specific criteria than previous research used.

“The fact that we found it, especially using this kind of methodology, confirms that men with bisexual arousal patterns and bisexual identity definitely exist,” said Allen Rosenthal, lead study author and doctoral student at Northwestern University.

Still, only 35 bisexual men, 31 homosexual men and 34 heterosexual men from the Chicago area participated in the study, which is a relatively small sample size and geographically restricted. More research must be done to confirm these findings, and to see if they apply to a wider group of self-identified bisexuals.

But the bisexual men’s responses also tended to suggest a preference for stimuli of one sex. It’s possible that generally bisexual men are attracted to both sexes, but to one more than the other; it’s also possible that they are more aroused by women sometimes and men other times.

The study falls short of determining whether most men who say they are bisexual have these arousal patterns; more research is needed in that area.

It also does not look at bisexual women. Other research on women’s arousal patterns, however, suggests that regardless of a woman’s self-reported sexuality, she tends to show a certain amount of physiological arousal when viewing erotica involving men, women and men with women.