The brain function of very late risers and "morning larks" during the hours of the working day is different, according to a study.

Researchers scanned the brains of night owls with a bedtime of 02:30 and awake time of 10:15, along with early risers.

The tests – performed between 08:00 and 20:00 – found night owls had less connectivity in brain regions linked to maintaining consciousness.

They also had poorer attention, slower reactions and increased sleepiness.

Researchers said it suggested that night owls were disadvantaged by the "constraints" of the typical working day.

They called for more research to understand the health implications of night owls performing on a work or school schedule to which they are not naturally suited.

Scientists took 38 people who were either night owls or morning larks (people who went to bed just before 23:00 and woke at 06:30) and investigated their brain function at rest using magnetic resonance imaging (MRI) scans.

The volunteers then carried out a series of tasks at various times, from 08:00 to 20:00, and were asked to report on their levels of sleepiness.

Morning larks were least sleepy and had their fastest reaction time in the early morning tests. They were also found to perform significantly better at this time than night owls.

In contrast, night owls were least sleepy and had their fastest reaction time at 20:00, although they did not do significantly better than the larks at this time.

The brain connectivity in the regions that predicted better performance and lower sleepiness was significantly higher in larks at all time points, suggesting connectivity in late risers is impaired throughout the whole working day, researchers said.

The lead researcher, Dr Elise Facer-Childs, of the University of Birmingham's Centre for Human Brain Health, said the findings "could be partly driven by the fact that night owls tend to be compromised throughout their lives". 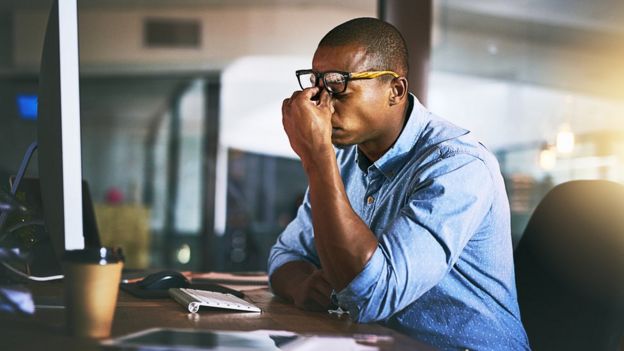 For a night owl the typical 9-5 day might diminish productivity, researchers say

She said there was a "critical need" to better understand how adapting to school and work times to which people are not suited, may be affecting health and productivity.

About 40-50% of the population identify as having a preference for later bedtimes and for getting up after 08:20, researchers said.

Dr Facer-Childs added: "A typical day might last from 09:00 to 17:00, but for a night owl this could result in diminished performance during the morning, lower brain connectivity in regions linked to consciousness, and increased daytime sleepiness.

"If, as a society, we could be more flexible about how we manage time, we could go a long way towards maximising productivity and minimising health risks."

Dr Facer-Childs stressed that the differences in brain connectivity are not a type of damage and are probably reversible.

There are also some limitations to the study.

The tests did not look at brain function later in the day, and it is possible that other factors not picked up on in the study, like lifestyle choices, may have affected the results.

Dr Alex Nesbitt, consultant neurologist at King's College London, who was not involved in the research, said the study added to evidence that a person's brain performance is influenced not only by the time of the day but also their body clock.

"It is becoming increasingly clear that these factors are important when 9-to-5 routines are widely imposed on people," he added.

The authors of the study called for more research to look at whether other brain regions might be affected by being a night owl or morning lark.

The research, which also involved the University of Surrey, is published in the journal Sleep.