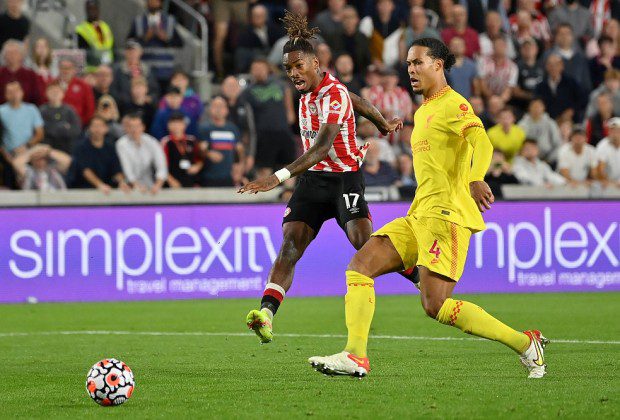 Yoane Wissa scored a late equaliser as Brentford held Liverpool to a draw in a thrilling encounter at the Brentford Community Stadium.

Wissa’s dinked finish over Alisson rescued a point for the hosts, who matched Jurgen Klopp’s team for long spells and created enough opportunities to claim all three points.

Mohamed Salah’s 100th Premier League goal for Liverpool put the Reds ahead for the first time in the match, only for Vitaly Janelt to equalise once more after Pontus Jansson had rattled the crossbar.

Curtis Jones restored the visitors’ lead with a long-range drive that took a wicked deflection off Kristoffer Ajer on its way in, but Brentford – and Wissa – had the last word.

The draw lifts unbeaten Liverpool a point clear at the top of the Premier League, with the Bees climbing to ninth.

Brentford have come a long way since their last meeting with Liverpool – a 4-0 FA Cup quarter-final defeat in the 1988-89 season – and they certainly gave the Reds a run for their money in a pulsating, breathless contest that could have gone either way.

Both teams had efforts cleared off the line in a frantic opening, Ajer denying Salah with a last-gasp lunge before Joel Matip hacked Bryan Mbeumo’s effort out of harm’s way at the other end.

Toney and Frank Onyeka also went close for the Bees, who eventually took a deserved lead from the unlikeliest of sources, Pinnock sliding home for his first Premier League goal.

The hosts were in front for just three minutes, however, as Jota headed Henderson’s delivery beyond David Raya for his third league goal of the campaign.

The visitors ended the first half in the ascendency and it took a fabulous piece of goalkeeping by Raya to deny Jota his second of the game after Jones’ shot had rebounded off the post and into the Portuguese’s path.

The Brentford goalkeeper managed to get a hand to Salah’s effort nine minutes into the second half, but was unable to prevent it crossing the line for the Egyptian’s 100th league goal for the Reds.

Salah is the 13th player to reach a century of league goals for the club, and the fourth to do so in the Premier League era after Robbie Fowler, Steven Gerrard and Michael Owen.

Undeterred, Frank’s side kept pushing forward and equalised once more through Janelt, with Jones unable to get to the ball before it crossed the line.

Jones’ thunderous drive put Liverpool back in the driving seat and Salah should have given the Reds a crucial two-goal cushion, but the 29-year-old’s chipped effort landed on the roof of the net.

That miss proved costly as Wissa – who had only been on the pitch a matter of minutes after replacing Christian Norgaard – clipped the ball over the onrushing Alisson to complete the scoring.

That was not the end of the drama, however.

Toney rifled the ball into the bottom corner with three minutes remaining to send the home fans into raptures, only for the offside flag to cut short their celebrations.

But Frank and his players were given a fantastic reception at the final whistle after claiming a hard-earned point that continues their fantastic start to life in the top flight.