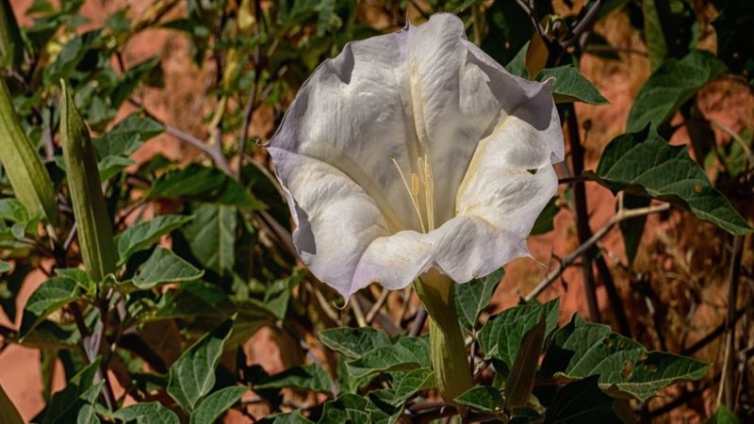 Datura features in the mythology of the Chumash people, and was used in group ceremonies

Cave art in California created by indigenous Americans about 400 years ago depicts a hallucinogenic plant, according to new research.

Pinwheel Cave in southern California gets its name from a red, wheel-shaped drawing on its ceiling.

Researchers had previously discovered the chewed remains of plants, stuffed in crevices in the ceiling of the cave.

Now the remains have been confirmed as Datura, a plant used historically for its psychoactive effects.

While many have believed that prehistoric rock art was influenced by hallucinogens, this latest research suggests that the rock paintings at Pinwheel Cave depicted the Datura plant itself, rather than any visions caused by the plant, the study said.

However, the findings do present “the first clear evidence for the ingestion of hallucinogens at a rock art site”, the study, which was published in the Proceedings of the National Academy of Sciences, added.

“I was like: ‘Wow, we found the smoking gun of hallucinogens at a rock art site,'” David Robinson, a lecturer in archaeology at the University of Central Lancashire who led the study, told ScienceMag.org.

The painting showed the artist was “representing the plant that causes the hallucinogenic experience – not the vision that is caused by the plant,” Dr Robinson said, adding that “they’re venerating the plant, saying: ‘That plant’s cool.'”

Sandra Hernandez, a Tejon tribal member who worked on the study, agreed that the art was depicting the flower.

“I kind of marvelled at the shapes that they captured in the rock art compared to the actual flower unfurling,” she said.

The discovery of various different tools and food scraps suggest that the cave was likely a communal area, the researchers said, and the rock art could have been “acting as visual catalysts for communal experiences”.

The artwork could have helped with “setting the scene”, like religious artwork in other settings, to help people who were sharing the tradition of taking the hallucinogenic plant in that cave, Dr Robinson told Live Science.

DISCLAIMER: The Views, Comments, Opinions, Contributions and Statements made by Readers and Contributors on this platform do not necessarily represent the views or policy of Multimedia Group Limited.
Tags:
California
hallucinogenic plant