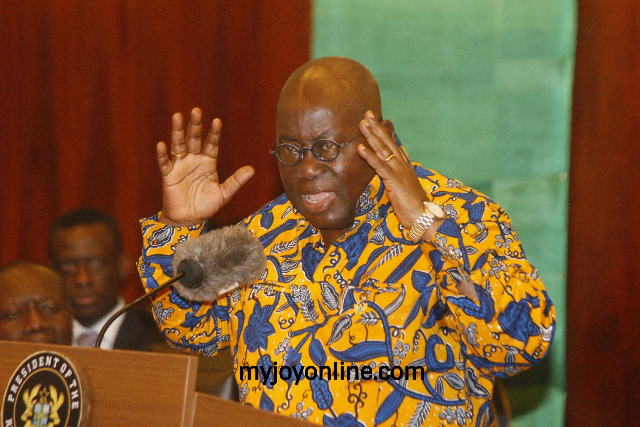 Ghanaians taste for foreign goods, President Akufo-Addo has said, is the reason for the yearly depreciation of the cedi.

He believes that if Ghanaians manufactured some of the many products they import and or patronised locally made goods, the local currency’s yearly depreciation will not occur.

According to President Akufo-Addo, the depreciation of the cedi touches everyone in the country and “I am thinking that our public discourse should also begin to focus much more on some of the structural problems involved in our currency. Yes, there are moments when you can fall…but there are structural problems we so far, do not articulate loudly enough in my view.

“We live in a country where we are overly dependent on the importation of things for our daily sustenance, things we can produce we continue to import them and at the same time, we don’t generate enough exports.

“That is the issue on the current account, the persistent deficit in our national income statistics on current account. That is what gives rise to the frailty or our currency,” the President said.

He was addressing a delegation from the Ghana Bar Association (GBA) led by their president, Anthony Forson.

Mr Forson who raised concerns about the depreciating cedi during their interaction with the president asked that something is done about the situation.

His concerns follow the sharp depreciation of the cedi against its major international trading currencies especially the dollar, last week. The cedi depreciated from ¢4.9 to around ¢5.6, sparking fears among the business community.

It, however, appears to have started a marginal appreciation this week, selling at ¢5.3 cedis to the dollar on Tuesday.

But the president wants long terms measures to taken to halt the annual depreciation.

He said the over-dependence on imports has been understood to be “the origin of the real fragility of our currency, like all social and political problems, once you are able to attract people’s attention then, of course, solutions follow.

“If you buy things from abroad, you are creating work outside Ghana which you could create inside this country. We need to focus on that and at the same time be much more competitive in our attitude to the things that we produce.”

President Akufo-Addo disclosed that the Trade Ministry will soon come out with the list of Ghana’s import profile so Ghanaians see what they use their money to buy.

“I am prepared to bet that 70 per cent of the things on that list are things we could produce for ourselves in this country,” the President said adding, “This is the importance of the One District One Factory initiative.”

“It is not just a political gimmick it is an attempt to address the issue of being more self-reliant. This whole Ghana Beyond Aid mantra that is now abroad is about that. It is about self-reliance, of doing for ourselves things that we continue to depend on people to do.”