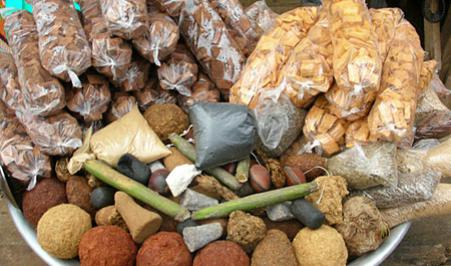 Traditional medical systems and practices are not static timeless entities that remain unchanged over centuries or millennia.

Rather, they are diverse and increasingly globalised healthcare approaches that continue to evolve and hybridise.

The greatest influence on most of these systems has been and still is biomedicine. Thus, most traditional medical practices are not only ‘‘traditional’’ but also “contemporary”.

The herbalists use medicinal plants for treatment, but the medical practice is devoid of any spiritual connotations unlike the herbalist-spiritualists, diviners and shrine devotees who incorporate the metaphysical into their practice.

Treatments in the case of diviners and shrine devotees may include but is not restricted to use of plants. The traditional birth attendants (TBAs) are community-based midwives who usually incorporate some herbs in their practice during the pre-natal and post-natal periods of care.

These categorisations and definitions in traditional medicine are still fluid and may even overlap depending on the socio-religio-cultural setup of the practitioner.

Again, although, a lot of these medical practices still exist in their traditional form, retrospectively, practices have not remained immune to advancement in knowledge and the influence of other socio-religious ideologies.

Historically, disease theories among these practitioners have not been well-defined: a common feature of most traditional African health systems, so patient care is very subjective and highly varied, especially when the intangibles are employed in a bid to explain the cause of a disease.

The advent of biomedicine and its spread in the country on one hand may have complicated the development of practices, forcing them into the fringes of medical care and creating a rift between the conventional and traditional systems at some point in our history.

On the other hand, the benefits of traditional medicine and the relevant improvements became evident when attempts to forge a relationship between the conventional and the traditional systems began.

For instance, we had the herbalists and traditional birth attendants whose practice, as explained, were devoid of the mysticism and became well-matched to work with the expanding frontiers of science.

A lot of these practitioners collaborated with research institutions such as the Centre for Plant Medicine Research in Mampong-Akuapem and the Council for Scientific and Industrial Research.

Equally, there were some “spiritually biased” practitioners who were also open to the application of science and hence collaborated with these agencies.

This contact with biomedicine can also be credited to the heightened need to integrate traditional medicine into mainstream medical practice. Hence, the numerous strategies and interventions implemented by various governmental agencies to achieve this aim.

This choice to apply scientific knowledge in the delivery of traditional medicine in Ghana has created the desire for most practitioners to step away from their medical philosophies.

This shift is from the old idea of a man in tatty clothing, physically unkempt, sitting on the floor in a room designed as if to scare the disease out of you, to the new practices in ultra-modern buildings with well-structured consulting rooms, in-patient units, laboratory services and dispensaries.

The standard today is well-packaged medications with dosages and sometimes quite advanced formulations.

Some facilities have even gone entirely paperless right from registration to the point of the patient receiving his or her treatment.

However wonderful these advancements are, we are at a critical point on our course where there is an inevitable risk of forcing out indigenous medical knowledge and practices for those that appear to be more scientific but upon scrutiny, are not.

It is erroneous to assume that nice physical structures, with a lot of equipment and well-packaged medications, imply some science is being applied. Recently, it has become common for practitioners to blend in knowledge from different health systems around the world.

This paradigm comprises a fusion of Ghanaian traditional medicine, partial biomedicine and other foreign alternative medical practices, especially those of the Far Eastern origin.

Here, save those who may have been trained in practices such as Ayurveda, traditional Chinese medicine and who are “puritans”, we also have other sets of practitioners in Ghana, who for want of their practice, take on that contemporary look, randomly pick components from foreign traditional medical practices to support this perception.

Misappropriation of medical knowledge and its negative health impact on users of such practices should also be one of the reasons why regulators and stakeholders should guard against this trend.

Ultimately, our traditional medical system should be protected and where changes to practices are warranted, scientific validation should be the only benchmark. The scope of the practice must, therefore, be well-defined.

If policy seeks to make traditional medicine scientific, then we must not make room for “pseudo” science.

It will be dangerous to relegate our indigenous medical knowledge to the background and lose out to a knowledge or system that is totally unscientific.