China says it is seriously concerned about North Korean nuclear development, in the wake of a BBC interview with a top official from the North.

North Korea's vice-foreign minister told the BBC Pyongyang would continue to test missiles and would launch a pre-emptive nuclear strike if it thought the US was planning an attack.

There has been heated rhetoric from both sides in recent days. US Vice-President Mike Pence, who has been visiting the region, warned the North not to test Washington and said the US "era of strategic patience" with Pyongyang was over.

The BBC's Stephen McDonell in Beijing says the Chinese government appears to be becoming increasingly frustrated with North Korea, its traditional ally.

"I have noted the recent report," Mr Lu said, referring to the BBC interview.

Mr Lu added that tension was already high in the region before the latest comments from Pyongyang.

The North held a show of military might in a parade over the weekend and tested another missile on Sunday, which the Pentagon said blew up almost immediately after launch.

Pyongyang said it may test missiles on a weekly basis, and warned of "all-out war" if the US takes military action.

"If the US is planning a military attack against us, we will react with a nuclear pre-emptive strike by our own style and method," Vice-Foreign Minister Han Song-ryol told the BBC on Monday.

Later Mr Pence vowed to "defeat any attack and meet any use of conventional or nuclear weapons with an overwhelming and effective American response".

The US Navy's Carl Vinson strike group – consisting of an aircraft carrier and other warships – is on its way to the Western Pacific, Pacific Command said on Tuesday, following an order from President Donald Trump last week. 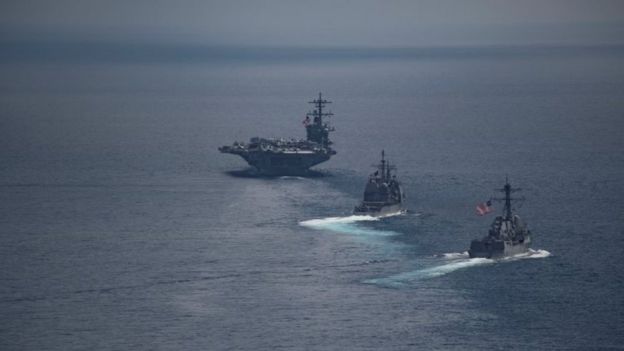 It has emerged that when the original announcement of the group's movement was made it was travelling in the opposite direction.

It is not clear whether this was a deliberate deception, a change of plan or simple miscommunication, the BBC's Korea correspondent Stephen Evans says.