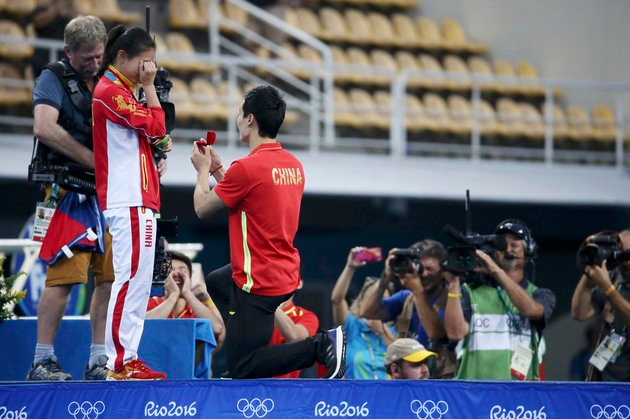 Chinese diver He Zi will never forget Rio 2016. Not only did she walk away with a silver medal in the women’s 3-meter springboard, she also went home with a diamond ring after her boyfriend and teammate Qin Kai proposed poolside.

Video going viral shows how Qin approached He shortly after her medal ceremony ended on Sunday.

On bended knee and with the crowd cheering, he popped the question. With tears in her eyes, He nodded her head to say yes.

“We’ve been dating for six years, but I didn’t expect him to propose today,” she later said in a press conference. “He said a lot of things, made a lot of promises, but I think the thing that touched me the most is I think this is the guy I can trust for the rest of my life.”

He lost to fellow Chinese diver Shi Tingmao in her event while her now fiancé scooped up a bronze medal in the men’s 3-meter synchronized springboard.