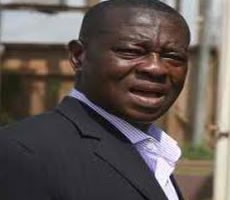 This follows the submission of a formal petition Wednesday by a group calling itself Concerned Ghanaians.

On the said tape, Yaw Boateng Gyan is heard plotting to infiltrate security agencies with party loyalists for election purposes as well as the rank of the newly formed splinter party of the NDC, NDP.

The leader of the group, Stephen Amoah told Joy News that the comments as captured in the leaked tape compromised National Security adding that the CID must also unravel how many of such infiltrates are in the security agencies.

According to him, the police must immediately arrest the NDC Organizer in order to get to the bottom of the issue. Mr. Amoah noted that if the police failed to arrest and prosecute the NDC man, they (the group) will take the matter to a higher level.

Stephen Amoah, urged the police not to shield persons whose actions threatened the peace of the nation as December polls draw near.