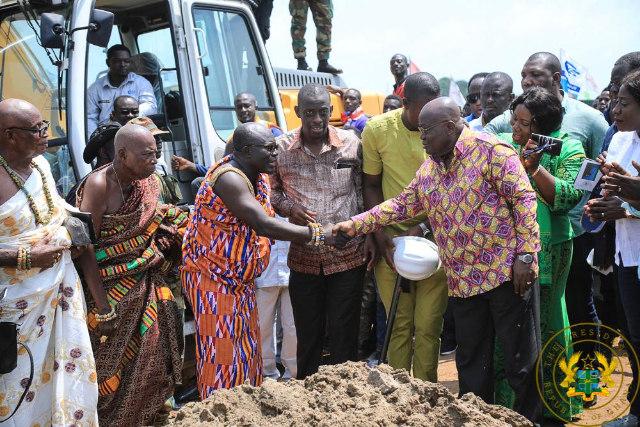 Work has commenced on the construction of a mini-harbour and fish landing site in Axim, in the Western Region.

President Akufo-Addo cut the sod on Wendesday, July 24, during the second day of his tour of the region in fulfilment of a pledge made to the people of the town in the run-up to the 2016 elections.

According to President Akufo-Addo, “the pledge I made in 2016 was not an empty one, and it was not a lie. I knew I would fulfil it, and, by God’s grace, we are about to witness the start of the construction of this project, which will lift up the standards of living of the people of Axim”.

The construction of the project, which started in 2007, and was abandoned after the 2008 elections when the New Patriotic Party government of President John Agyekum Kufuor exited office, he said, is a commitment of his government towards the growth and development of the fishing industry.

With the project set to be executed by China Harbour and Engineering Company over a 30-month period, and will involve the construction of breakwater, a quay wall, dredging and ancillary facilities, President Akufo-Addo told the gathering that the project will be completed within the time frame.

The President noted that the sod-cutting ceremony is a symbolic one, marking the simultaneous start of the construction of other landing sites in Senya Beraku, Dixcove, Elmina, Moree, Mumford, Winneba, Gomoa Fetteh, Teshie and Keta.

“The promises I made to the Ghanaian people, one after another I am going to fulfil each and everyone of them,” he assured.

The Minister for Fisheries and Aquaculture, Elizabeth Afoley Quaye, who was also present at the event, indicated that “the completion of the landing site will help increase the productivity of fishers by providing safe place for berthing of canoes and fish handling. It will ensure safety of fishing gears and properties, improve hygienic handling of fish and fishery products to meet international standards for export.”

In order to re-energise the aquaculture development programme, the Minister noted that adequate incentives have been provided to stimulate private sector investment, quality extension delivery and inputs support.

With the Ministry currently piloting the Aquaculture for Food and Jobs flagship programme in the Ashanti Region, Hon. Elizabeth Afoley Quaye noted that the implementation of the programme is expected to boost aquaculture production, and provide several direct and indirect jobs for the youth.

DISCLAIMER: The Views, Comments, Opinions, Contributions and Statements made by Readers and Contributors on this platform do not necessarily represent the views or policy of Multimedia Group Limited.
Tags:
Axim
Harbour