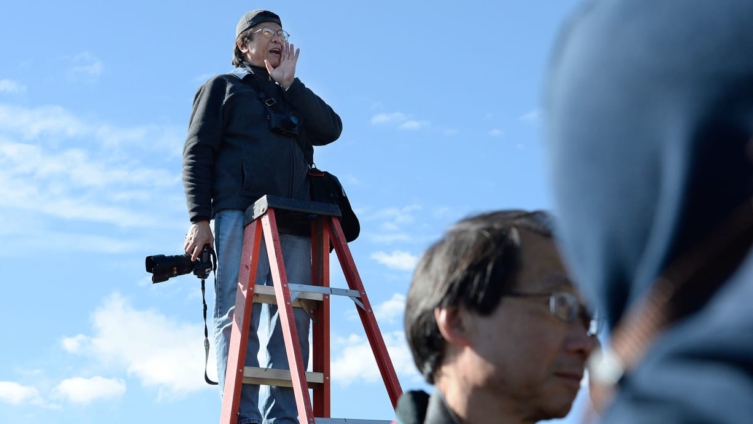 Corky Lee, an award-winning photographer who captured the everyday lives and political activism of the Asian American community, has died at the age of 73 after battling Covid-19.

“It is with great sadness that we announce the passing of Corky (Young Kwok) Lee,” said a statement from Lee’s family on Wednesday evening. “Corky, as he was known to the Asian American community, was everywhere.

He always had a camera around his neck, documenting a community event, capturing a social injustice for the record and even correcting the social injustice of a historical event that took place well over a century ago. He did what he loved and we loved him for it.”

(Corky) had a very unique lens. His passion was to rediscover, document and champion through his images the plight of all Americans but most especially that of Asian and Pacific Islanders,” the statement added.

“He has left us with what is likely to be the single largest repository of the photographic history of Asian Americans of the past half-century.”

Lee first began experiencing Covid-19 symptoms on January 3, and was hospitalized on January 7, according to a family statement on a Facebook fundraiser page. He was moved to the ICU on January 11.

He is survived by his brother and sister-in-law, his elder sister’s husband, and both siblings’ children, according to the family’s statement.

His photography began in junior high, when he saw a famous 1869 photograph commemorating the completion of the transcontinental railroad, according to the Asian/Pacific/American Institute at New York University.

But the photo, purportedly showing railroad workers, contained no Chinese workers — despite there being an estimated 15,000 Chinese laborers contributing to its construction.

The photo’s apparent erasure of Chinese workers inspired Lee’s future work: a lifetime of photographing Asian Americans and cementing their representation in history. In one of his most famous works, he gathered a group of Chinese Americans and descendants of Chinese railroad labourers to recreate the 1868 photograph in the same original location.

He also captured other historic moments of social and political upheaval; his photos covered antiwar protests, fair housing issues, the gentrification of Chinatown, Islamophobia after 9/11, and more. His work became more widely recognized after 1975, when he captured large-scale protests against police brutality, following the beating of a Chinese American at the hands of New York police officers.

In another well-known instance, Lee photographed furious demonstrations in 1983, sparked by the murder of Vincent Chin and the light sentence for his killers — a turning point for Asian American civil rights in the following decades.

His dedication to documenting racial injustice, its consequences and the community’s resistance continued until the end, with recent work focusing on attacks toward Asian Americans during the coronavirus pandemic, according to the family’s statement.

But his work also depicted the everyday, with many scenes from New York City’s Chinatown from the late 20th century. His photos showed shopkeepers lounging next to their goods, restaurant chefs on the street during their lunch break and children performing traditional lion dance at festivals. Other shots that captured the nuance and spirit of Asian American life.

Lee was actively involved in the community in other ways, too — in 2015 he co-founded 21 Pell Street, an organization that holds free cultural and community events in Chinatown.

A film about his life and work, “Photographic Justice: The Corky Lee Story,” was in production at the time of his death.

“When I think about my past, what stands out most is how hard and how long the journey has been,” Lee says in the film’s trailer. “In all my photographs, I’m trying to include as vignettes, pages that should be in American history books, that have been omitted or taken out.”

“The pursuit of photographic justice, you have to keep going on because there’s so much that needs to be done,” he adds.

Lee was “one of the main documentarians of the Asian American movement,” curator Ryan Lee Wong is quoted as saying in the trailer. “This is important because social movements are so hard to capture — and Corky was really there at just about every rally and movement and event.”Lee’s death was met with an outpouring of grief and gratitude from the Asian American community on Wednesday.

Jennifer Takaki, the director of “Photographic Justice,” posted on Facebook that Lee was a “true hero.”

“Our film will pay tribute to his legacy and his never ending pursuit of photographic justice. RIP Corky, you are loved and will be forever missed,” she wrote.

Wong, the curator who appeared in the documentary, said in an Instagram post that he was “devastated” by the news.

“I don’t know who we’d be without Corky Lee’s photos,” he wrote. “When I was gathering art and archives of Asian American organizing, his photos were evidence of the struggle, a vital report from the movement. Community is made of people who show up, and he showed up to everything: rallies, exhibitions, dances, policy meetings, and every banquet in Chinatown.”

“Photos have been crucial in preserving history. Immigrants, including AAPIs (Asian American Pacific Islanders), have greatly contributed to the rich fabric of American society,” said Linda Ng, National President of the Organization of Chinese Americans.