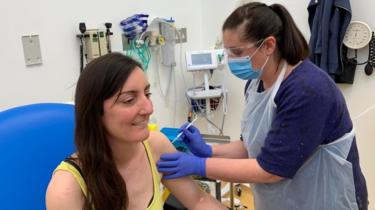 A vaccine against coronavirus appears to have provided protection against the disease Covid-19 in six rhesus macaque monkeys.

It gives early hope for the vaccine, which is now undergoing human clinical trials.

There is no guarantee this result will translate to people, though.

The animals who had been given the vaccine, and were then exposed to SARS-CoV-2, had less of the virus in their lungs and airways.

That’s compared with the control group of monkeys which was not given the vaccine.

The trial took place in the US, involving researchers from the US government’s National Institutes of Health (NIH) and from the University of Oxford.

The vaccine appeared to protect the animals against developing pneumonia.

Promisingly, they also didn’t develop “immune-enhanced disease” – which BBC medical correspondent Fergus Walsh describes as a “theoretical risk”. That’s when the vaccine triggers a worse response to a disease.

How close to developing a vaccine are we?

This response was seen in some early animal vaccine trials against SARS – another coronavirus – and proved a stumbling block in developing a vaccine for that disease.

The study hasn’t yet been reviewed by other scientists and formally published, but Prof Stephen Evans at the London School of Hygiene and Tropical Medicine, described it as “high quality” and “very encouraging”.

Meanwhile, trials in the UK on more than 1,000 human volunteers are currently taking place through the University of Oxford.

There are more than 100 experimental coronavirus vaccines currently being developed.

Dr Penny Ward, a visiting professor in pharmaceutical medicine at King’s College London, said it was “helpful” to see that the vaccine didn’t cause a worse disease response in these monkeys, and that they didn’t develop pneumonia after being vaccinated.

The vaccine is based on a small part of the virus’s distinctive “spike”. The idea is that by getting the body to recognise a unique part of the virus, when it is exposed to the whole thing it will know how to react, and produce the right antibodies to fight it off.

That did seem to be happening to the vaccinated macaques, which produced antibodies capable of fighting the virus.