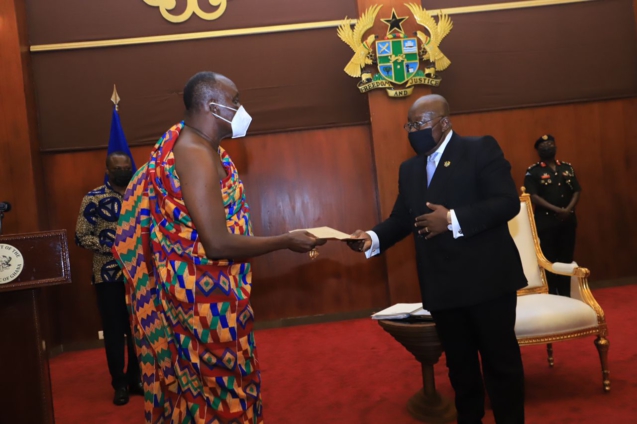 The Council of State has presented the outcome of its deliberation on a petition demanding the removal of the Chief Justice, Kwasi Anin-Yeboah, to President Nana Akufo-Addo.

The chairman of the Council, Nana Otuo Serebour, presented its findings as to whether a case has been established against the Chief Justice to warrant an impeachment process.

An anti-corruption civil society organisation, the Alliance for Social Equity and Public Accountability (ASEPA) filed the petition over the Chief Justice’s alleged involvement in a $5 million bribery case.

Last month, a letter written to the Executive Director of ASEPA by Secretary to the President, Nana Bediatuo Asante, indicated that the President has commenced the appropriate processes.

The CJ has been in the news following allegations by a private legal practitioner, Akwasi Afrifa, that he had asked for a $5 million bribe to deliver a favourable judgment in a case involving his (Akwasi Afrifa’s) client.

Justice Anin-Yeboah has since denied the allegations and asked the Police CID to probe the matter.