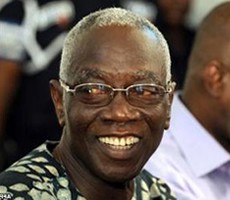 The Chairman of the Electoral Commission, Dr. Kwadwo Afari-Gyan, insists there is nothing wrong with the decision to create 45 new constituencies despite the fact that the elections are barely three months away.

The EC Chairman described those who have mounted harsh criticisms at the Commission’s decision as “rabble rousers”.

Speaking on Ghana Television’s (GTV) Election Platform, Thursday night, Dr. Afari-Gyan questioned the rationality of the EC setting aside its constitutional mandate just to please some political parties and other organizations.

The EC Chairman maintained that political parties who are complaining of limited time are only being mischievous as they have ample time to go about their business as far as the December 7 polls are concerned.

Dr. Afari-Gyan also rejected suggestions that the constituencies should only come into effect after 2012 elections. The EC is said to have up to 12 months after the publication of a census results to review the number of constituencies.

But Dr. Afari-Gyan said every citizen has to be represented in parliament hence the Commission’s decision to include the new constituencies in the upcoming elections. He said those who are asking for the postponement should go and justify it to residents of the newly constituencies.

The EC’s decision to create the 45 constituencies has been met with stiff opposition from various quarters including religious, civil societies, and political parties who argue that, the action of the EC has the tendency of creating chaos in the upcoming election.

Several key personalities have also added their voices to the call on the EC not to embark on the creation of the constituencies with former President Kufuour describing the EC’s decision as “unwise”.

The Constitutional Instrument which is to create the constituencies has also not gone without controversies having been withdrawn from the floor of parliament twice, due to some inconsistencies in the document.

The CI is now expected to mature after 21-sitting days of parliament having been laid last week when MP’s were summoned from their recess for an emergency sitting.