Dark clouds over Osagyefo Barge to settle next month 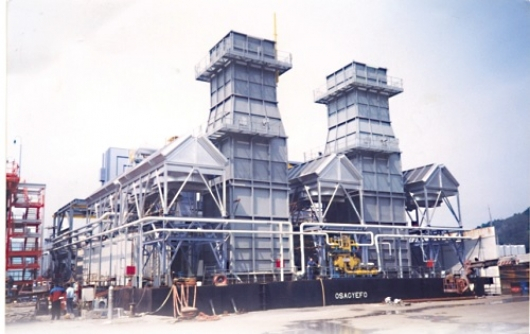 The International Court of Arbitration in The Hague, The Netherlands, has set January 2014 to pronounce judgement on the disputed Osagyefo Barge idling away at Effasu in the Western Region as a result of a long-running battle between the government and Balkan Energy over certain terms.

The prolonged litigation was due to the Balkan Energy’s insistence on auditing the country’s entire power lines before firing the US$110 million Osagyefo Power Barge meant to generate and add about 125-megawatts of power to the national grid.

It also wanted full details of the facility’s component, while the government had also demanded to know whether or not the barge was ready to generate power.

Balkan Energy turned down the government’s request on the grounds that Ghana was not ready to distribute the power that would be produced from the barge due to its unsuccessful demand for an audit of the power lines.

The government’s contention was that the lines were already set to receive the power from the barge and so there was no need to audit the system before firing the plant. This standstill brought the issue to The Hague.

The Minister of Energy and Petroleum, Mr Armah Kofi-Buah, told the GRAPHIC BUSINESS during a meeting with a section of the media that Ghana was convinced it had a case and was therefore certain about a positive outcome.

“We think we have a very strong case. But until judgement is given, no one can touch the plant because the injunction includes the land area where the barge is located as well,” the energy and petroleum minister explained.

The Communications Manager at the Ministry of Energy, Mr Edward Bawa, told the GRAPHIC BUSINESS earlier this year that until the dispute was resolved the barge could not be fired.

“It’s a long and complex case between the government and Balkan Energy because the two parties could not agree on certain terms”, he said.

The Balkan Energy Company (BEC) signed the 20-year contract agreement with the government in 2007 to equip, refurbish and commission the barge as well as its associated facilities within a 90-day period at a cost of US$40 million.

The contract was part of policy options pursued by the Ghana government to stem the power shortages in the country at the time.

The barge was purchased by the Ghana government in 1999 and was conveyed to the country in 2002. It was built in Italy with a Japanese loan of US$110 million, but the thermal plant sat at an Italian Port for two years, attracting a fee of US$10 million before being moved down to the Sekondi Naval Base, where it remained for yet another two years because the landing bay at Effasu, its previous final destination, was silted.

However, upon arrival, the Ministry of Energy demanded to carry out a financial and technical audit to assess the requirements necessary to bring it on-stream. This hit a snag as the company refused the request.

But before the dispute travelled to The Hague, Balkan Energy had also contested the legitimacy of the Power Purchase Agreement that leased the Osagyefo Power Barge to it in 2007 to operate.

Under the Power Purchase Agreement (PPA), 125-megawatts Osagyefo Barge was leased to Balkan Energy Ghana, wholly owned by Balkan Energy Company LLC, to commission within 90 days of an effective date defined in the agreement, repair, rehabilitate the barge.

Under the PPA, variable every five years, Balkan would have made a yearly lease payment of US$10 million to the government from the beginning of the sixth year to the 20th year.

Ghana currently has a generating capacity of 2,255 Megawatts and peak demand is around 1,750 Megawatts, but Mr Kofi-Buah said generation would reach 5,000MW by 2016.

However, the minister said there was an explosion at T3 power plant in June which had occasioned the shutdown of the entire plant for diagnostic works, saying “an independent assessment of the cause has been done and efforts are underway to get the units back by the end of first quarter of 2014.”

In 2014, the government is hoping to increase generation capacity above 3,000MW, with the completion of the 220MW Kpone Thermal Power Plant and the 110MW T2 (TICO Expansion) as well as 12MW photovoltaic solar project by the Volta River Authority.