But it was a night tinged with emotion as departing captain Nemanja Vidic made his farewell appearance as a first-half substitute, while 40-year-old Ryan Giggs enjoyed a late cameo with uncertainty surrounding his future as interim United manager.

Matty Fryatt pulled one back for the visitors, by which time United centre-back Phil Jones was already having X-rays on a shoulder injurysuffered in a first-half collision with Maynor Figueroa, only for Robin van Persie to have the final word. 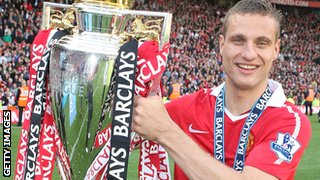 It was a tradition under Sir Alex Ferguson that if there was little to play for in the final home game of the season he would blood some kids.

Giggs followed the example, handing 20-year-old Welshman Tom Lawrence a chance in addition to Wilson, the Biddulph-born forward who has earned rave reviews for the reserve team this season.

And it was the teenager who provided the clear highlight of the opening period.

Finding space inside the box as Adnan Januzaj sent over a free-kick from the left, Wilson swivelled neatly before sending the ball past Eldin Jakupovic with an excellent first-time finish.

It was a rare bright spot in what has been a largely gloomy campaign for the hosts, who suffered their seventh home defeat against Sunderland at the weekend, a reverse which almost certainly cost them their chance of qualifying for next season's Europa League.

But even that happy event was preceded by an unfortunate one as Jones collided in mid-air with Figueroa as the pair challenged to meet a corner.

As soon as United's medical staff arrived on the scene to treat Jones they signalled the defender's evening was over.

The former Blackburn man made his way straight down the tunnel and then to hospital for a precautionary X-ray on a shoulder injury that will cause England boss Roy Hodgson to shuffle uncomfortably as he prepares to name his World Cup squad next Monday.

Jones' exit heralded the introduction of Vidic for the final time as a United player at Old Trafford before he joins Inter Milan in the summer.

The Serb's contribution to United's recent past was witnessed by the series of standing ovations he received. The first came when a presentation was made to him before the game by Sir Bobby Charlton, the second marked his arrival onto the pitch and there was a third to salute his first touch.

Vidic's introduction took one third of the slots available for Giggs to make what could turn out to be his farewell appearance, and Robin Van Persie took another as Wilson made way shortly after his second goal.

In tapping home the rebound after Marouane Fellaini's initial shot had been saved, Wilson had put himself in line to become only the third player in United history to score a hat-trick on his debut.

James Wilson is the fourth youngest player to score a Premier League goal for Manchester United at 18 years five months and five days.

Giggs opted to deny him the chance, although by the time the replacement was made, Fryatt had thundered home an excellent goal for Hull to halve the deficit. 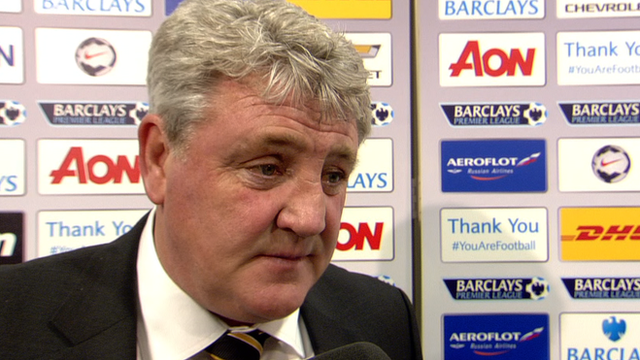 The Belgian's penalty-box threat was supposed to be one of the major selling points in a £27.5m move from Everton last summer, but Fellaini is still to score and his presence is used as evidence of all that was wrong with the short-lived David Moyes era.

Netherlands striker Van Persie has never had any problem finding the net of course.

And the two-time Golden Boot winner – a countryman of Louis van Gaal, the man expected to be put in charge of United in the near future – drove home his 18th of the season near the end.

There was still time for David Meyler to stand on Januzaj, which might catch the attention of Football Association officials less than a fortnight before the FA Cup final.

And in injury time Jakupovic tipped a free-kick from Giggs, who was making his 963rd United appearance, over the bar.

The save may well have ended the Welshman's remarkable record of scoring in every Premier League season.

"In the second half we decided to have a go at it and in the first half we were very comfortable. For me it is a foul for the second goal.

"A lot of players have staked a claim to play in the FA Cup final. Matty Fryatt has been terrific. He changed the semi-final and every time I have asked him to come on he has done well. He looks favourite to take that position.

"If it has ended for Ryan Giggs it has been some career. There will never be anyone as decorated. Sometimes the word great is used too often but he has been one of the greats.

"It can't be dark times when you have someone like Adnan Januzaj, he is only 18 and he looks a proper, proper player. In Januzaj they have the outstanding young player in Europe."