"Do you know who I am?", Ade Coker tells driver:seizes truck - MyJoyOnline.com

“Do you know who I am?”, Ade Coker tells driver:seizes truck 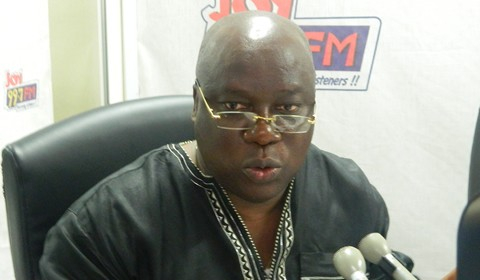 The Greater Accra Regional Chairman of the National Democratic Congress (NDC),Kobina Ade Coker, last Saturday, Sep­tember 27, impounded a truck loaded with musical instruments and parked it at his residence, following an accident at the Tetteh Quarshie Interchange in Accra.

The Kia Rhino with reg­istration number ER1314 -14, was said to have hit the NDC capo's black Toyota Tundra; but instead of reporting the matter to the police, Ade Coker decided to seize the vehicle.

The Kia truck is said to be at Ade Coker's Christian Village residence at East Legon and left at the mercy of the weather with the instruments in it.

The driver, Eric Danquah, 48, told Daily Guide on Tuesday that he was heading towards the inter­change from the Fiesta Royale Hotel traffic light at about 8:00pm when his vehi­cle appeared to have come into contact with a Toyota Tundra which was almost branching to the Villagio sec­tion of the interchange to the Airport link.

"I stopped immediately on the Tema/Madina stretch of the interchange and approached the occupant who had already taken the Villagio/ Airport section," he said, adding, "The moment I got to him he shouted, 'do you want to kill me?', 'do you know who I am?'.. .I am Ade Coker!"'

The driver added; "The moment he mentioned Ade Coker, I became frightened and decided not to challenge him because I realised he might be a very powerful person in the country. More so, his name rang a bell."

The driver said the NDC capo requested for his licence and when he handed it over to him, Mr Ade Coker threw it into his Tundra and locked the door.

"He demanded that one of my boys should join his car but we refused and he then asked us to follow him after reversing in the wrong direction and going ahead of us, while we followed him as ordered," Eric Danquah posited.

He said he led them to an area in East Legon called Christian Village, where Mr Ade Coker parked his vehi­cle, opened his remote controlled main gate and ordered him to drive into the house.

"When I parked, he shouted the name Atta, who appeared to me like the care­taker of the place and the man asked Atta to write my number on a piece of paper and then asked me to go away," he said, adding, "I was only able to pick a key­board and a microphone and no amount of persuasion could change his mind."

Mr Danquah said on Sunday as he was worship­ping at Aburi in the Eastern Region, he received a text message from Ade Coker's number. According to him, he was asked to contact the NDC Chairman but he returned to Accra on Mon­day and reported the matter to the Airport police instead.

A source at the police sta­tion confirmed the incident and said when they contact­ed Mr Ade Coker, he admit­ted the incident but told the law enforcers that he sent his car to a Toyota workshop and that Danquah was sup­posed to pay him GHC2,000 before the truck could be released.

When reached on tele­phone, Mr Ade Coker con­firmed that he was keeping the truck in his house and said "the guy nearly killed me on the motorway."

Asked why he did not invite the police to the scene to conduct investigation as the law requires, he said "I was going to call the police and he begged me not to do so… A police car was even passing but he was begging me so I let it pass," he implied.

He said, "We agreed by mutual consent that he should park his truck in my house and then when I fix it he will pay for the damage.

"Come and see the dam­age to my car. I can't even get the doors to buy. I have to import them and instead of him coming to beg me, he is running around with his story. When you do this I am bound to take my pound of flesh."

He said he was not ready to send Daily Guide pic­tures of the damaged part of the vehicle, saying "the gen­tleman should come and apologise to me. If he hasn't got money to pay, he should come and beg me and he will drive his car away."

“You should have led him to me to say, 'Oh! Mr Coker, this man hasn't got money to pay so kindly for­give him', then I will under­stand, but you are rather encouraging these people," he told this reporter.

"He should have come to my house to check on my health then I can consider him. After all, what is GHC2,000?"

When Daily Guide insisted that he should have called the police to assess the situation to know whose fault it was, he replied, "I was in front of him…Listen to me, I am older than him and you.

"I am not interested in whether my side of the story be told. Somebody was going to kill me and you should have told him to go and burn the sea”.

The NDC Regional Chairman underscored, "I am not going to use his car but I must have security…I have not impounded his car…it was by mutual con­sent… is this also news? I want the police to come and take it away and make sure he settles my bill. This is no big deal. As for you, my life is not important so he can kill me and run to you in the media."