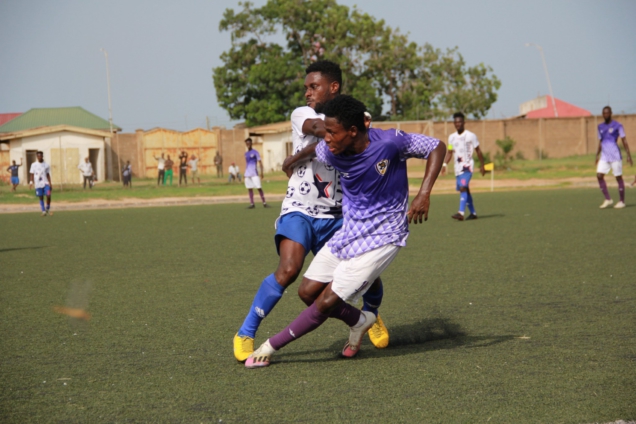 Liberty Professionals’ dream of an early return to the Ghana Premier League received a major boost on Wednesday, May 18, following their victory over Tema Youth at the Tema Stadium.

Two goals in the second half from Blaise Macadjei and Seedorf Asante were enough to overcome the Harbour Warriors, who struck early in the game through Evans Osei Wusu.

Going into the game with both teams pegged at 52 points, a win for either side was key to giving them the needed edge to return to the Premier League.

Osei Wusu opened the scoring after 29 minutes, beating the goalkeeper from close range to give the Harbour Warriors a halftime lead after being played through on goal.

Tema Youth and Osei Wusu looked to have had a second just minutes into the second half but the referee, who initially whistled to award a goal after the 22-year-old hit the ball directly from the corner kick, rescinded the decision after consultation with the assistant referee.

The incident led to an official from the home side confronting the officiating team while fans at the stadium expressed their displeasure.

However, that was the turning point of the game as the Scientific Soccer lads struck twice to earn all three points. Macadjei turned into the net with a simple effort while Asante scored directly from a free-kick outside the penalty box of the home side to make it 2-1 for Liberty.

The win over Tema Youth now means Liberty go three points clear of the table in Zone Three with four games to go.

DISCLAIMER: The Views, Comments, Opinions, Contributions and Statements made by Readers and Contributors on this platform do not necessarily represent the views or policy of Multimedia Group Limited.
Tags:
Division One League
Evans Osei Wusu
Liberty Professsionals
tema youth