E-levy: We will not allow anybody presiding to vote – Minority 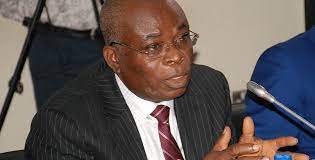 Deputy Minority Leader, James Klutse Avedze says his side of the House will not allow any presiding deputy speaker to partake in the voting on the E-levy bill when it is tabled before Parliament.

Speaking to JoyNews’ Kwesi Parker-Wilson, he stated that the House does not want to witness the fisticuffs that happened in 2021 during the bill’s deliberation; hence the right thing should be done.

“What we are asking the government to do is to table the E-levy. Whether they want to maintain the existing bill or introduce a new one, the government should do it. We don’t want any trouble, or any fight again in the chamber. But, we will not allow anybody who is presiding to vote on the E-levy, we won’t allow that.”

Mr Avedze said that all 137 Minority MPs will be in the House when the debate and subsequent voting on the E-levy bill is in session.

His comment comes after the numbers of the NDC MPs and their chance to vote against the E-levy bill came into question after the governing NPP prayed the Supreme Court to halt NDC MP for Assin North, James Gyekye Quayson, from holding himself as a parliamentarian.

According to the NPP’s Director of Elections, Evans Nimako, the party will employ the judicial process to stop the MP from attending Parliament. He also wants the Supreme Court to interpret Article 94 (2A) of the 1992 Constitution.

The Assin North MP has also been slapped with charges including forgery and perjury by the Attorney- General’s Office.

But the Minority in Parliament described the charges against James Quayson as a lousy tactic by the government to pass the E-levy.

Haruna Iddrisu said the suit against the Assin North MP is a ‘sickening display of desperation’ by the government to go ahead with the controversial levy.

But, Mr Avedze says that despite the Majority’s efforts to “reduce their numbers” by charging the Assin North MP with perjury, the Minority in their numbers will vote vehemently against the bill.

“Once they marshall the numbers, we also have to marshall the numbers. The E-levy from all angles, from all issues that have come, the concerns raised by Ghanaians, every facet o this country, it is clear that the E-levy is not good. It’s because it is like you are picking money from somebody’s pocket without his knowledge, so that’s why this government is bent on imposing this levy.”

Meanwhile, Minority Leader, Haruna Iddrisu, says the NDC will resist the suit filed against Mr Quayson by the Attorney-General.

Addressing a press conference in Parliament on Thursday, he stated that the suit is an insult to a pending petition before the Appeals Court.

He said since the Appeals Court is yet to rule on the substantive matter, he does not understand why the New Patriotic Party (NPP) will file another suit, seeking to prevent Mr Quayson from holding himself as an MP.

“Also, an application for a stay of execution of the Cape Coast High Court’s annulment of the Assin North Parliamentary elections, filed by Mr Quayson, is still pending before the Court of Appeal.

“Under the circumstances, the lawful and reasonable thing for the Ghana Police and the ruling New Patriotic Party (NPP) and their surrogates to do is to abide by the decision of the Court of Appeal on these processes as their modicum contribution to the respect for the principles of the rule of law,” Haruna Iddrisu stated.

DISCLAIMER: The Views, Comments, Opinions, Contributions and Statements made by Readers and Contributors on this platform do not necessarily represent the views or policy of Multimedia Group Limited.
Tags:
E-Levy
James Avedzi
Minority in Parliament