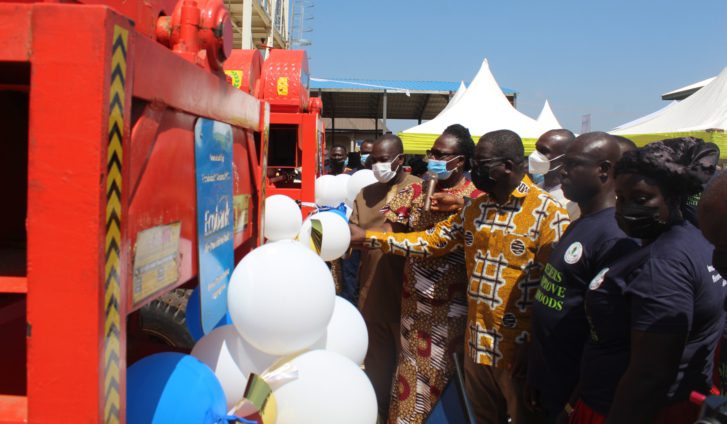 Ecobank Ghana PLC has donated 4 corn dehuskers and an articulated truck to 4 Yedent Agro Group of Companies aggregators and farmers in the Bono and Ahafo Regions.

According to the Managing Director of Ecobank Ghana PLC, Daniel Sackey, the financing of the equipment, worth about 160,000 dollars, is to help the aggregators produce more as well as help reduce post-harvest losses.

He made the remarks during the handing over ceremony at the forecourt of Yedent Agro Group of Companies in Sunyani under the theme; “Inclusive and sustainable finance for agribusiness value chain”.

The bank facilitated the acquisition of the equipment for the aggregators through the Agro Company, which would be paid back under flexible terms.

Mr. Sackey said Ecobank has a dedicated desk for Agribusiness, aimed at understanding the peculiar needs of the sector to enable the Bank to position itself and support the farmers better.

He noted that the 4 dehuskers are expected to support about 6,000 out-growers and smallholder farmers, out of which 60% are women and from 83 different communities.

This, he explained, “is a direct initiative of the Elevate Product at Ecobank, dedicated to supporting the financing needs of women to positively impact their lives”.

He said as a bank, they appreciate the risk in agriculture, but they could do more for farmers if they would be transparent and discuss real challenges with them as they did 4 months ago, resulting in the support they have offered.

“We expect that you would make all payments on the mobile up so that there would be a history of payment to aid more financial support and more production”.

The Ecobank MD, Daniel Sackey, said they expect the equipment would help their client, Yedent Agro Company, to grow its business and strengthen the agribusiness value chain.

The CEO of Yedent Agro Company, Ntim Adu, expressed his excitement and thanked Ecobank for believing in their business concept and supporting the aggregators and farmers who are actors along the value chain. The Company’s activities are spread along the entire cereal and legumes value chain.

He averred the dehuskers would help his company get the about 15,000 metric tonnes of maize required from the smallholder farmers in the next year, and hoped the operators would maintain the equipment.

Oppong Kwaku of Kenneth K. Oppong Enterprise, an aggregator, said the support from Ecobank would help them produce more promptly. He assured of their readiness to honor their side of the deal to ensure that more farmers would also benefit from similar support.

The Bono Regional Minister, Justine Owusu Banahene, applauded Ecobank for the bold steps taken to support the farmers despite the risk factors and further appealed to other banks to emulate Ecobank so that farmers can expand their output to ensure food security in Ghana.

DISCLAIMER: The Views, Comments, Opinions, Contributions and Statements made by Readers and Contributors on this platform do not necessarily represent the views or policy of Multimedia Group Limited.
Tags:
Ecobank Ghana
Yedent Agro Company