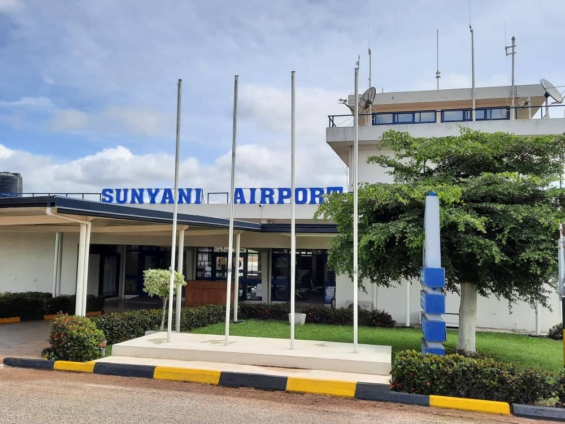 The Bono Regional House of Chiefs has issued a strong warning that will lead to punishment for encroaching on the Sunyani Airport lands.

Encroachment of the land remains a major hindrance to the ongoing Sunyani Airport renovation project.

But the chiefs in the region are determined to use their powers, after a fact-finding, to ascertain how the land meant for the airport and its future expansion encroached.

Speaking after an inspection of the ongoing renovation work, which is already behind the completion schedule, Okokyeredom Sakyi Arko II, the Vice President of the Bono Regional House of Chiefs said everyone found culpable will be dealt with.

The visit forms part of the Regional House of chief’s vision of bringing chieftaincy to bear on the needs of the citizenry.

The chiefs have decided to monitor key developmental projects in the region and have started with the Sunyani Airport project.

And the encroachment of the airport land by private developers and the risk associated with it remains the contractor’s main challenge.

Residential apartments with reflective roofing continue to spring up few meters away from the runway, a worrying situation the chiefs are ready to help resolve with the involvement of all stakeholders, including the chiefs of Odumase No1, Awuah Odumase, Fiapre, and Sunyani, lands commission, Ghana Civil Aviation Authority, and the management of the airport.

Okokyeredom Sakyi Arko II who is also the Paramount Chief of Drobo Traditional Area insisted the airport land was allocated long before the encroachment and they will work to salvage the situation.

He said, “as traditional leaders, we will go for the original airport land plan from the lands commission and trace how the encroachers came in”.

“Whoever is involved in authorizing the encroaches will be brought to book, whether it’s an individual, or the district Assembly that gave the permit, or the traditional council that allocated the land, or the lands commission with the power to legalize the ownership of the land”, he stressed.

He further noted, “We will examine from what originally existed to what is existing now to ascertain who has encroached on the original Land and surely, we will bring pressure on everybody and punish culprits”.

He also stressed that the risk involved in developing properties around the airport is too huge for them to ignore.

“Hopefully, some of the buildings may be demolished, or their roofing, etc. may be adjusted for the convenience of the project”, he concluded.

The Vice President of the Bono Regional House of chiefs, Okokyeredom Sakyi Arko II, however, expressed their appreciation to the government for the commitment towards the completion of the project.

The first phase of the renovation is about 1,500 meters of the runway, which is near completion, and other auxiliary facilities.

The chief said they are pleased with the quality and extent of work though they have a problem with the project timeline.

However, he said they have been assured by the contractor that the first phase of the project will be completed and handed over, latest by October 2021. It will mean aircraft can land and take off at the Sunyani airport.

The Bono Regional House of chiefs also plans to engage the government and other authorities so that phase two of the Sunyani Airport will commence on the heels of the completion of phase one. This will facilitate the movement of businesses and other people ready to patronize Sunyani and the Bono Region.

Meanwhile, the Sunyani Airport management and the contractor of the project declined to speak to the media.

DISCLAIMER: The Views, Comments, Opinions, Contributions and Statements made by Readers and Contributors on this platform do not necessarily represent the views or policy of Multimedia Group Limited.
Tags:
Bono Regional House of Chiefs
Encroaches
Sunyani Airport