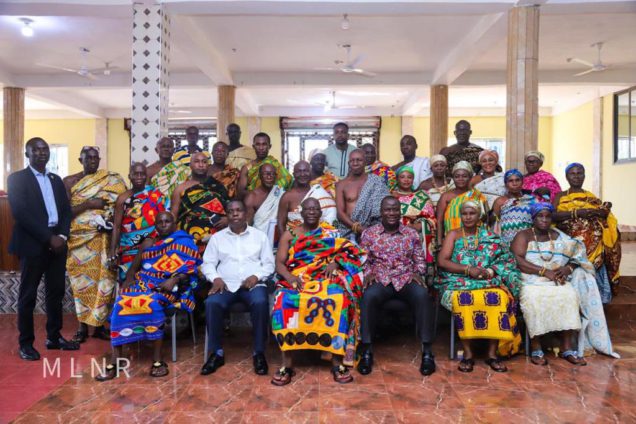 The President of the Bono East Regional House of Chiefs and President of Yegi Traditional Council, Pimampim Yaw Kagbrese V, has appealed to government through the Minister for Lands and Natural Resources, Samuel Jinapor to as a matter of urgency assist them exploit gold discovered in the region responsibly.

He said he will be very glad if the Minister will mobilise the needed resources, especially logistical support to ensure the exploitation is properly carried out and help bring development in the area.

The King said illegal mining in the region is not rampant as compared to other regions but bemoaned the practise of illegal lumbering which he described as something that calls for the urgent attention of government.

The Lands and Natural Resources Minister, Hon. Samuel A. Jinapor who spoke at length on the issue of lumbering in the region appealed to the chiefs to work hand in gloves with the REGSEC to place a ban on the harvesting of wood for charcoal on commercial purposes to help preserve the only forest cover available to Ghana for future generations.

In view of the fight against logging, the Minister asked that the REGSEC adds on a member from the Regional House of Chiefs to be part of the task force and audit committee which is to be established to ensure that they have an all-inclusive force.

Hon. Jinapor assured the chiefs that all the concerns tabled before him will be taken up with speed and provide all needed logistics, especially with regards to gold exploitation in the region, for the benefit of all.

The Bono East Regional Minister, Hon. Akwasi Adu Gyan who accompanied the Minister on his working visit on Tuesday, 16th November 2021, called on the traditional authorities within the region to support the Lands Minister and the government to succeed stressing that ” if the Minister succeeds, the government succeeds and it will all be for our own benefit”