Energy minister Boakye Agyarko has been asked to provide evidence to his claim that some disgruntled politicians are behind a plot to blow up oil facilities in Ghana.

The Minority in Parliament has branded the comment made in the U.S. as the " most reckless, unpatriotic, self-destructive and treacherous statement ever made by a Cabinet Minister" with the caveat that it be substantiated.

The minister reportedly was speaking on the sidelines of the Offshore Technology Conference (OTC), one of the biggest exhibition events in the sector. 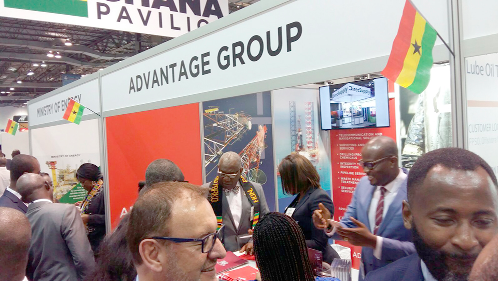 The April 30 to May 3 event marked the first time Ghana secured a pavilion at the conference, where there is an investor hunt for the country's petroleum sector.

In a statement littered with adjectives ranging from "fantastically unnationalistic" to "abhorrent," the opposition MPs castigated the minister for his comment.

They said he has scored an own-goal because he has embarrassed his country at an international event. The attention of the Minority Caucus in Parliament has been drawn to a statement attributed to the Minister of Energy, Mr Boakye Agyarko – a statement which has received wide media coverage. Mr Agyarko's statement is to the effect that some politicians are plotting to blow up oil facilities in the oil enclave of the Country.

The Minister further states categorically that some disgruntled politicians have been inciting the youth in attempts to cause disaffection for the operators of the oilfields, similar to what happens in other troubled jurisdictions. The Energy Minister is reported to have made these alarming and destabilising remarks on the international stage in Houston, Texas to top executive of oil companies on the side-lines of the Offshore Technology Conference (OTC).

Surprisingly, the Minister failed then to substantiate his claims and has still not provided a scintilla of evidence to back his assertion.

The Minority in Parliament considers the Minister's statement as having the obvious potential to scare away investors and negatively impact the Oil and Gas sector.

If Mr Agyarko's allegations remain unsubstantiated, it will go down in history as the most reckless, unpatriotic, self-destructive and treacherous statement ever made by a Cabinet Minister against Ghana's economic progress and national interest.

So far it does appear that Mr Agyarko's remarks are fantastically unnationalistic, spurious and outrageous. It is a tragedy that the man who the taxpayer pays to protect and promote our energy sector can engage in such abhorrent, disgraceful and "own-goal" sabotage of our country’s well-being.

Since the discovery of oil in commercial quantities, successive governments have continued to harness the human resource of the country to ensure productive investments in the Oil and Gas sector for the benefit of the entire citizenry.

To this end, the Atta Mills/John Mahama led administration saw to the successful production of first oil from the Jubilee fields, construction of three FPSOs, as well as establishing an ultramodern Gas Processing Plant with the aim of adding value to our oil.

We therefore call on the Minister to as a matter of urgency substantiate and cause the arrest and prosecution of those politicians he knows to be conspiring to blow up our Oil and Gas installations.

If the Minister fails to provide the necessary evidence by close of week, we demand that National Security takes the appropriate steps to invite the Minister for interrogation. We expect our institutions charged with the duty to protect life and property including our natural resources to be up and doing especially in the face of such grave threats. This is certainly not a matter to be ignored or swept under the carpet.

The Minority hereby serves notice that should the Minister and the National Security Apparatus fail to discharge their moral and legal obligations in this matter, we will trigger processes in Parliament to compel the Minister to assist the House protect our Oil and Gas resources as is expected of a responsible Minority and any Parliament worth its salt.