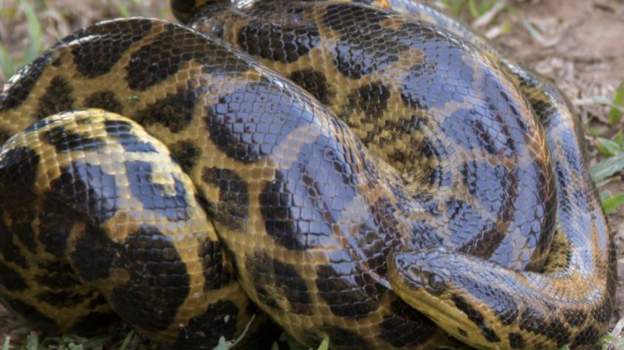 Anacondas are native to the Amazon of South America

Nine days after it went missing, a two-metre (6ft) pet snake called Medusa is now said to be back with its owner.

The yellow anaconda had escaped when its tank was being cleared out, owner Preesen Nair told South African media.

He sought to reassure residents of Phoenix – a town just north of the coastal city of Durban – that Medusa “was a gentle giant” who was “not going to eat you like in the movies,” as he told East Coast Radio.

But according to local media, there was some confusion about precisely when the pet snake returned home.

SowetanLive reports that an “outraged woman posted photographs on Facebook of the snake slithering in overgrown grass near her relative’s yard on Sunday afternoon”.

Mr Nair confirmed to SowetanLive on Monday that the snake was found in his neighbour’s garden on Sunday, and not a week earlier as had been previously reported, saying: